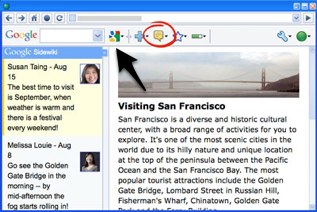 Google has launched a new version of its Toolbar for Firefox that lets you translate any webpage with the click of a button without leaving the page. Google will also add web-site suggestions and sponsored links to the toolbar as you type in any query.

The new toolbar is synced with Firefox version 3.5’s Private Browsing mode so that the tool bar will not record your searchbox history while you are in this mode. It will also turn off PageRank, Web History and Sidewiki.

Last week, Google announced their new web annotation system, Sidewiki, that will be included in the new version of Toolbar for Firefox. Sidewiki allows users to leave a comment on an entire page or a selected piece of text, and share the URL via email, Twitter or Facebook. Users can read and vote comments up or down, which creates a user ranking for each individual that will determine where their comments fall on the Sidewiki. The higher the ranking, the higher comments appear. So now you can make comments on pages that aren’t published in your own language.