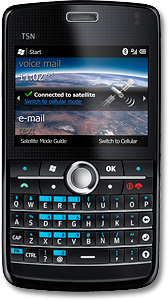 AT&T announced today that they are teaming up with Terrestar to release a smartphone with satellite capabilities. Previously, satellite phones were limited to just voice calls, or the occasional tethering (that didn’t work very well).

AT&T teamed up with TerreStar to release the new phone, called the “Genus”. The new smartphone will combine both standard cell phone connectivity (via the AT&T network) and the option to use the satellite connection. The new phone will be aimed at users in the US, Puerto Rico, and the Virgin Islands, and will switch between the satellite network and the cellular network as needed. No word on pricing as of yet, however the phone is expected to be released sometime during first quarter 2010.