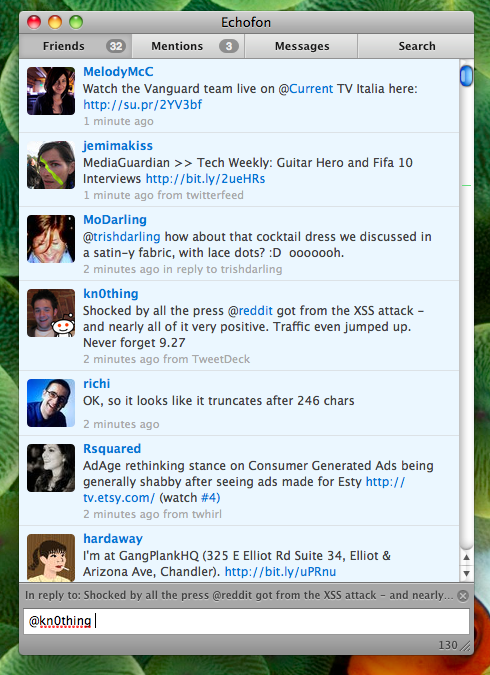 Yesterday, when I wrote that Tweetie was the best iPhone Twitter client not everyone agreed. Fair enough, there are a few other really great ones including Birdfeed (which we’ve covered here) and Echofon (the app formerly known as TwitterFon). And the team behind Echofon has today rolled something that puts it ahead of Tweetie in at least one regard: A native Mac client that syncs with the iPhone client.

While Tweetie does have a (very nice) Mac client, there is no syncing between it and the iPhone version just yet. It is coming, but Echofon has beaten them to the punch. This puts in in the league with TweetDeck, which also has a desktop and iPhone client that sync, but Echofon is nicer because it’s a native Mac app rather than running on Adobe Air. (Seesmic also has an iPhone app in the works that will sync with its desktop client, though that is again, Air-based.)

So how is Echofon for Mac? It’s great. It’s super simple and very fast. It has a very clean design that is entirely silver and white which features your tweet stream, a new tweet input box along the bottom, and columns for Mentions, Messages, and Search along the top. You are alerted to new message updates by a number (the number of messages) placed next to the column name in which the new messages reside. Updates seem to come in quickly (every couple minutes or so).

Adding a picture to a tweet is as easy as dragging one from your desktop into the new message area. Clicking on someone’s name or picture unveils a new tab that displays all of that users information, including most recent updates.

And yes, there is multiple Twitter account support. There is also the ability to set different types of notifications for new messages including badging dock icons and Growl notifications. Also cool is a Highlights area which allows you to keep track of keywords that you don’t want to miss. Yes, this is basically saved search, but it gives you alerts, just like track of old.

Another nifty little feature is that when you click the reply button on a tweet, the message you’re replying to appears right above the tweet entry field so you remember what you’re supposed to be talking about.

It is important to note that sync only works right now for Echofon Pro users, but if you’ve been addicted to Echofon, hopefully you are using that anyway. (If not, get it, it’s $4.99.) Eventually, the plan is to offer the syncing funtionality with the free version of Echofon as well.

Currently, Echofon for Mac is being offered as a public beta. That means it may be a little buggy, and also missing some features (un, manual refresh?), but is also free. Eventually, when it’s ready to launch, it will carry a price (just as Tweetie for Mac does). Find it here. 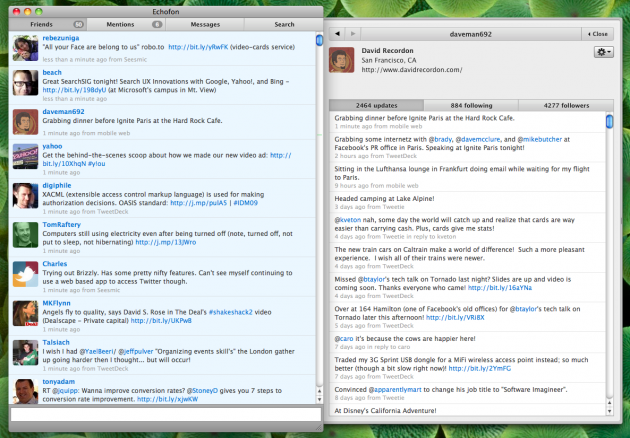