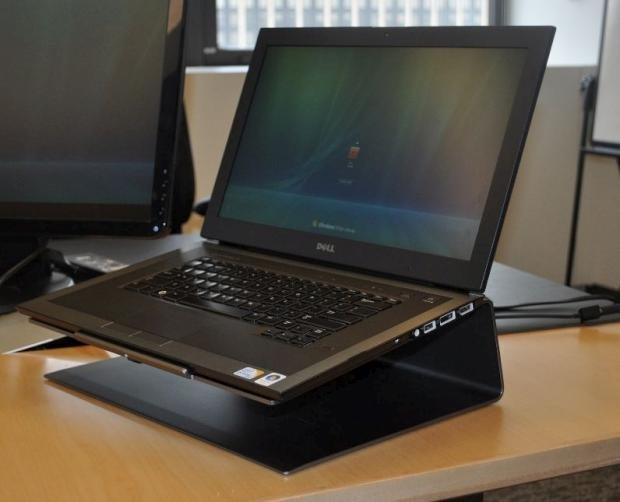 Dell’s got something for the business set today in the 16-inch Latitude Z, a $2000 notebook that measures just over half an inch thick, weighs 4.5 pounds, and charges wirelessly.

That’s right, thanks to the miracle of inductive charging, the Latitude Z needs only be placed atop a docking station that both rejuvenates the battery and connects the computer to various peripherals. The wireless dock will cost $200 and will be “available in the coming weeks” according to Dell’s press release.

The system’s 4.5-pound weight is made possible by using a relatively underwhelming 4-cell battery but, knowing Dell, you’ll very likely be able to outfit the system will bigger battery packs – at least a six cell, maybe even a nine cell.

Other features include a 1600×900 screen resolution, face recognition, and a multi-touch trackpad. The Latitude Z is available today although at the moment it’s not showing up on Dell’s site yet, so I’ve no idea what sort of CPU, RAM, and hard drive options are available.

Gizmodo is reporting that it uses an Intel ultra low-voltage CPU as well as an ARM processor for booting up in an instant-on mode. More details as they become available on Dell’s site.