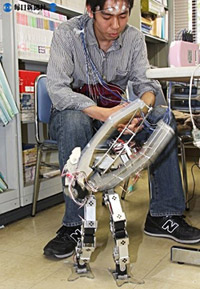 Let’s see… a robot that responds to the thoughts of its master (is “master” the right word here?). Pretty sure that we (humans) will bring about our own downfall, either by blowing each other up, or by inventing a robot that says, “You guys are idiots, so I’m going to kill you.”

This particular robot comes to us by way of the University of Electro-Communications in (where else?) Tokyo. It was actually designed to help its designer (creator?) compete on Robo-One, some sort of robot battle tournament in Japan. Looks to be a lot like that old show Battlebots, just with more “roboty” looking robots, and not something that looks like a toaster with a pike attached to the front.

Of course, you can extrapolate the concept—robots that obey mere thoughts—to things like surgery and other, useful medical applications.