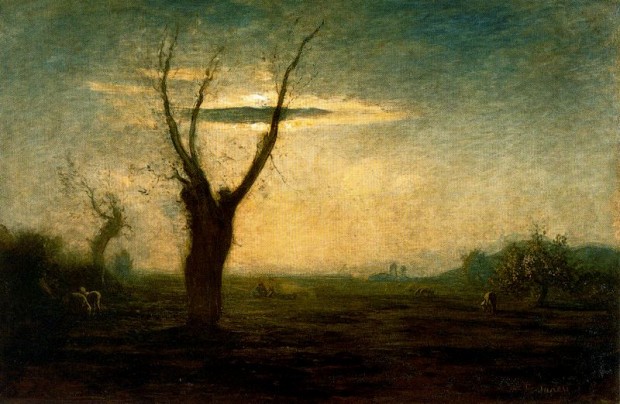 Ever since I got it, the album art for Cul de Sac’s Death of the Sun has intrigued me. I’m ignorant of 19th-century landscape painters, which is as far as I could nail the style down, and after extensive Googling I could find nothing on it at all. Ten years ago I would be SOL. But today the whole internet is a community, and you’re only one step away from the answer to your question, whether you know it or not. Luckily I’m a member of Metafilter, and so my first recourse was to go to Ask Mefi and put up the question — after searching diligently for dupes, of course.

Defying my expectations utterly, the hive mind, while it applied itself admirably, failed to produce the answer I desired. In the process, however, I was exposed to an excellent artist (Corot), reminded of one I’d meant to look into (Millet), and made aware of a school of which they were all a part (Barbizon). So not a loss at all. However, someone had tracked down the album art designer’s webpage, where I was able to find his email address.

I emailed him, and he forwarded the question to Glenn Jones, who founded the band. After a day or two I received a reply from Glenn, who told me about the painting and how he came across it. The designer also let me know that the album will be coming out on vinyl shortly, and I’ll be picking it up. The artist, Antonio Fontanesi, is a bit hard to find online, but there are some high-quality images at Ciudad de la Pintura, a valuable site I’ll be consulting more often.

The point of this story is not that I’m some sort of tube ninja, or that you all should listen to Cul de Sac, but that the Internet can be a wonderful place. As a casual (and anonymous) inquirer, I was able to get a personal response from the founder of a band I love, in addition to all the other good stuff that resulted from it. We cover a lot of the crazy startups that are the embryos of the next phase of the net, but I think sometimes we lose sight of the most remarkable fact of this technology: that it essentially reduces distance to zero and degrees of separation to one — and I think that’s worth celebrating every once in a while.