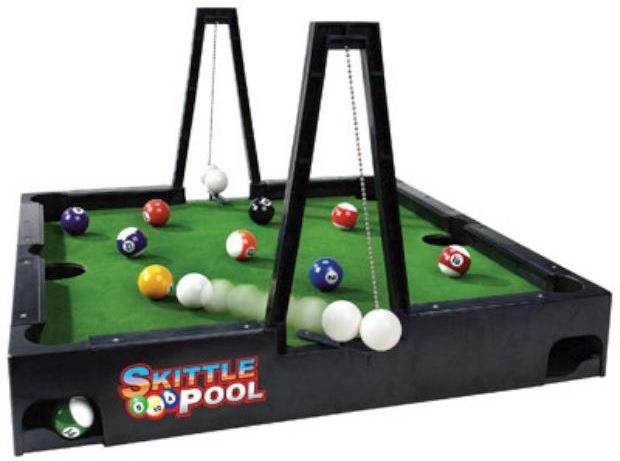 As I was perusing my hand-picked collection of websites that may or may not contain wonderful gadgets to write about – a ritual I perform Monday through Friday after breakfast and before my 10AM “good, healthy cry” – I came across this game on Hammacher Schlemmer’s site: Skittle Pool. What in the hell is Skittle Pool?

Apparently the original game came out in 1970, which would explain my unfamiliarity on the topic. Being born in February of 1979, I missed out on most of the important events of the decade and the ones I witnessed have long been forgotten in the non-working memory bank of a newborn infant.

So from what I gather, Skittle Pool is a tabletop billiards apparatus that can employ the same scoring systems as most standard pool games, except that instead of using a cue stick, you place the cue ball on a rotating stand before each shot and slam into the aforementioned cue ball with yet another cue ball attached to a pendulum chain.

Or as BoardGameGeek.com more eloquently puts it:

Skittle Pool is similar to “Skittle Bowl”, however the pins have been replaced by nine 2″ billiard balls. The table is approx. 24 inches square with 3 pockets each on the left and right sides. At the bottom of the board is a pendulum device that acts as the striker. The cue ball is placed in a special pivot foot and that foot is rotated to aim the cue ball at a target ball. The striker, a ball similar in size to the cue, is lifted and released (or gently thrown) to strike against the pivot foot which in turn transfers the energy to the cue ball.

Most billiard type games can be played on the table. A scoring rack (wire with plastic scoring chips) is included in the game.

The game was most notable for its promotion by American actor Don Adams who was well known for his role as a bumbling secret agent in “Get Smart” on 1960’s television.

Ah, Get Smart. I do recognize that name as a popular show from the 60’s that recently got made into a movie – further proof that Hollywood has officially run out of new ideas.

A quick YouTube search turns up the actual Skittle Pool commercial from way back when:

And while the product page on Hammacher Schlemmer doesn’t contain any reviews from Skittle Pool owners, it appears that the same item is available at Amazon for $20 less. The reviews (and there are only two of them) range from the surface not being very flat to the new version being so cheaply made that it broke, was replaced, and broke again.

If you’re feeling both nostalgic and industrious, you can make your own Skittle Pool table instead. This project over at Instructables came about as a result of the cheap plastic version breaking and, while the DIY version could probably use some felt, a second pendulum, and something more than tape to hold it together, it ought to serve as a good jumping off point for anyone serious enough to take a stab at it.

Any old-school Skittle Pool owners out there? Fun? Not fun? Would you buy it again?