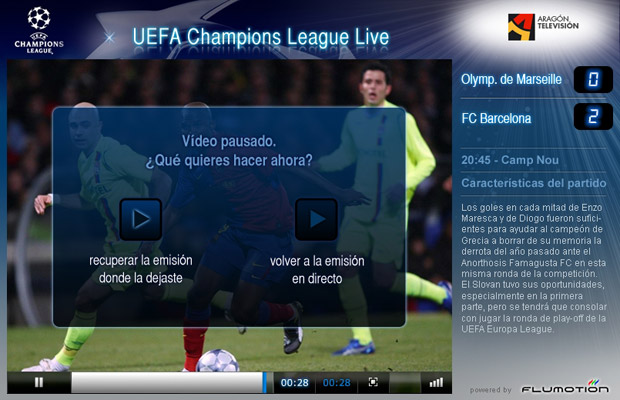 Matchday Two of the UEFA Champions League begins tomorrow. You probably already know this, because, really, who doesn’t love the Champions League? Exactly. But unless you have DirecTV (here in the U.S.), you’re stuck with whatever games are on the Fox networks. These games primarily feature the English teams, because, I guess, the idea is that “Americans speak English, so they probably like English teams.” Maybe it’s a ratings thing, I don’t know. (There’s a point to all of this, believe me.) There’s a company based out of Barcelona called Flumotion that has developed a new, maybe even better, way to watch the Champions League online. If you’re at all familiar with a DVR, then you’re familiar with the company’s new setup.

The company hooked up with Aragón Televisión to develop a new streaming solution for Champions League games. You can pause the live feed, go make a sandwich, then come back and A) resume the video from where you left off, or B) resume from the live feed itself. I don’t know why you’d pick option B, since option A is kinda The Whole Point of DVRs.

Then Flumotion added all sorts of stats to the side there, so it’s not unlike viewing an ESPN GameCast.

(Flumotion actually helped Real Madrid stream the introductions of Kaká and Cristiano Ronaldo earlier in the year. I watched both streams!)

In a perfect world, Flumotion would hook up with Fox Soccer Channel here in the U.S., and offer this type of fancy streaming. That way, if you’re at the office but still want to see the game, well, you can, and you can go on your lunch break and not miss a single kick of the ball.

It does seem to be Europe-only (if not Spain-only), but it’s something to keep an eye on.

And if there is a God, I’d like to see Real Madrid v. Barcelona as the final this year, and see Barcelona totally dismantle the “Florenteam” at their home stadium. That would be outstanding.

Oh, also. That’s Olympique Lyonnais, not Olympique de Marseille in the photo there, Flumotion. Presumably other nerds have already pointed this out to you.