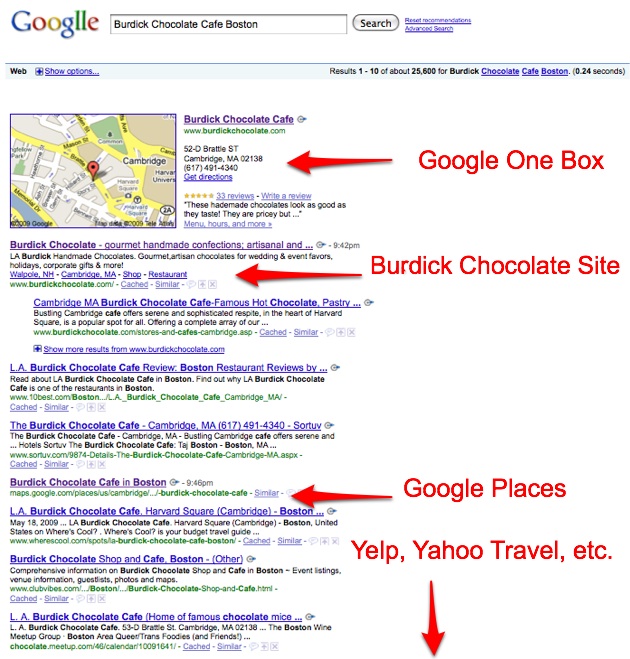 One of the original goals of Google has always been to help people find the information they are looking for and get out of the way as fast as possible. It was a point of pride, and in fact a design principle, to get people off the search results page to other places on the Internet. Yahoo was the site that tried to keep you from ever leaving, Google was the opposite.

Well, it was easier to send people away when Google was just a search engine. Now it has apps and Gmail and Google Maps and Google Books, and a lot of other reasons to stick around on Google itself. But there is still a clear demarcation between its content/communication sites and search. At least there was until late last week when it launched Google Places on Google Maps. Google Places is a local search page for restaurants and other local businesses that brings together the address, phone number, Website, maps, description, directions, photos and reviews all on one page.

When you click on a pin for a local business or place of interest on Google Maps a bubble will open up, and if you click “more info” sometimes it will take you to the Google Places page. So far, so good. Google Places is simply making Google Maps better, right?

And Google is indexing them, despite assurances to the contrary. If you do a search for the Burdick Chocolate Cafe in Boston, for instance, the Google Places page is the sixth result, above results from Yelp, Yahoo Travel, and New York Times Travel. This wouldn’t be so bad if Google wasn’t already linking to itself in the top “one Box” result, which shows a detail from Google Maps. So within the top ten results, two of them link back to Google content.

Your chances of clicking on a Google page for this particular search are pretty high. Google isn’t sending you away anywhere. And if you do go to the Google Places page for Burdick Chocolate, it is made up of rehashed content from other sites: snippet descriptions from InsiderPages, Judy’s Book, a menu link from AllMenus, photos from CityGuide and Yelp, and reviews from Igougo and CitySearch. On the right is a small Google Map and below that are Google search ads.

It’s actually a pretty useful page, and there is certainly value in aggregating all of this information in one place. Google might even license the data, which would mitigate any protests that it is “stealing” the content like we see with Google News. But nobody really cares about that. The real issue is whether or not Google is going to favor its own pages in its index when it comes to local search. SInce Google’s algorithm is a black box, there is no way to know one way or another. But the question is out there.

Maybe the Google Places page for Burdick Chocolate ranks highly only because Google used it as an example in its pre-briefings and a lot of bloggers subsequently linked to it. The point, though, is that these Google Places are getting into Google’s index. (Tartine Bakery is another example). Even if they make it onto the first page of Google search results for legitimate reasons, their very presence goes against the fundamental principle that Google’s main purpose is to link out to the best information on the Web, not to hoard the links for itself.

We know what will happen if it keeps going down this path. It will turn into Yahoo.

Update: It appears that Google is now taking steps to remove Places pages from its organic results. It’s added a “Disallow: /places/” tag to the robots.txt for Google maps. (The robots.txt tells Google’s search engine how to treat the content on a site, and a disallow tag instructs it not to crawl indicated portions of a site).

Update 2: A Google spokesperson came back with the following explanation:

From the time of launch, we did not intend for the Place Pages to be crawled or appear in organic results – we even confirmed that publicly. We did discover that some URLs were still open (the example in question, Burdick, was the one that we heavily promoted in all our blog posts, as Matt [Cutts] pointed out), so we’ve blocked those over the past 24 hours to stay consistent with our original plan for this launch. These should no longer appear in our organic search results.

Also, I know there have been some questions about the URL structure: they were designed to be “friendly” URLs with the specific intention of making them easier to share and link. 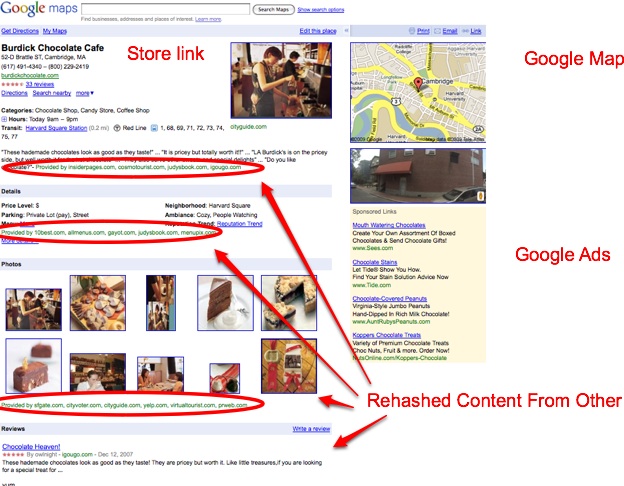