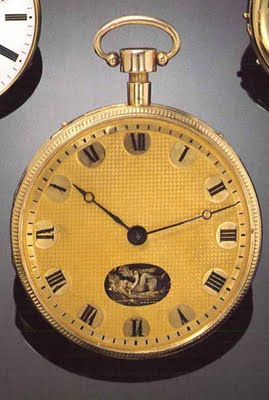 Before the Internet, when a gentleman wanted to polish the brass knobs of his dear mum’s armoire he would depend on his internal spank bank which, potentially, included nudes he had seen in postcards and museums as well as racy lines about breasts he may have read in the Bible. However, barring a visit to the local establishment of vice, there was little way to view two people giving it the old Charles and Diana, if you catch my meaning.

Most of these automata are hidden behind little flaps, thereby allowing the gentleman to consult his watch of an evening and, when he is ready to ride the Peace Train to Gravy Town he can flip open the watch and trim his rose bush.

These are not be confused with the 1970s digital models made famous by Willem Defoe in Autofocus. These are much classier, and feature scenes such as two monks visiting the velvet underground of a milkmaid as well as a piece by Breguet that features a man giving it the old Hoosier try in a more dignified manner, less outdoorsy manner.

I encourage you to head over to Watchismo to see them all but I’ve taken the liberty of removing the kitten on the Breguet, just for a taste of the magic that awaits.

You can also buy this sort of thing on eBay if you’re so inclined.