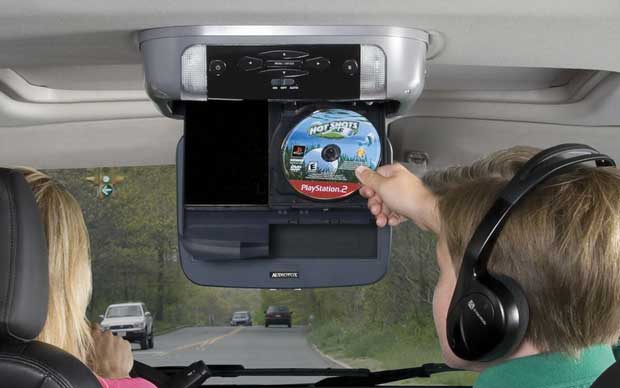 Tuners and posers have been putting PS2s into cars for as long as the system has been out, but Audiovox is targeting a completely new crowd. Its new VOD10PS2 system combines the gaming system that can also play DVDs with a 10.2-inch 16:9 LCD screen and packs it all into a roof-mountable package. Plus, the system comes with two wireless controllers, two fold-flat IR wireless headsets, two games, and a remote. A built-in 16 channel FM modulator can be used as long as other passengers don’t mind hearing Ratchet & Clank. Sure, the PS2 might be almost 10 years old, but who cares?

PS3 games are damn expensive and no one in their right mind would let their kids bring them on a road trip. PS2 games, however, can be had at garage sales nationwide. Or, if you’re traveling and your kids get tired of whatever the hell they are playing, stop at any Blockbuster and you can probably snag one for $5. But the system costs $949 plus installation. Yeah, that’s a lot.

NEW YORK, Sept. 22 /PRNewswire-FirstCall/ — Audiovox Corporation (Nasdaq: VOXX) announced the delivery of another industry first in rear-seat entertainment, the VOD10PS2 Mobile Video PlayStation(R)2 computer entertainment system. This category changing mobile video system is an all-in-one, overhead, drop-down that combines the best of Audiovox’s award winning overhead systems with the gaming industry’s #1 selling system, PlayStation 2. The integration of the PlayStation 2 system in the Audiovox overhead video system is seamless. No extra hardware needed, no wires draped across the back seat passengers.

“This RSE system allows the consumer to give their ‘restless’ back seat occupants options in travel; watch a DVD or play one of their PlayStation 2 games,” said Tom Malone, president of Audiovox Electronics Corp. “The PlayStation 2 system offers a huge library of more than 1,800 games for all types of interests, and now we’re making it easy to play them all in a vehicle by fully integrating PlayStation 2 into the car’s entertainment system with no wires and no extra hardware.”

The VOD10PS2 features a 10.2 inch 16:9 LCD screen with built-in dome light and includes everything you need to start gaming right out of the box two wireless game controllers, two fold-flat IR wireless headphones and two PlayStation 2 game titles (Ratchet & Clank(R): Going Commando and Hot Shots Golf(R) 3). This system (MSRP: $949.99) also includes a remote control, built-in 16 channel FM Modulator with FM transmitter function, and comes with both Shale and Pewter trim rings and snap on covers to integrate the system to the vehicles interior.

Malone continued, “PlayStation(R) is one of the most respected brands worldwide and they have built the PlayStation 2 system into one of the leading entertainment choices for people of all ages. Audiovox is the undisputed leader in mobile video and has been since the category’s inception. This combination of industry leaders gives our dealers a winning product while providing the consumer with entertainment convenience that before now was anything but convenient.”

This system is being marketed both under the Audiovox and Advent Brands and will be available for sale in North American at all major retailers at car dealerships respectively.