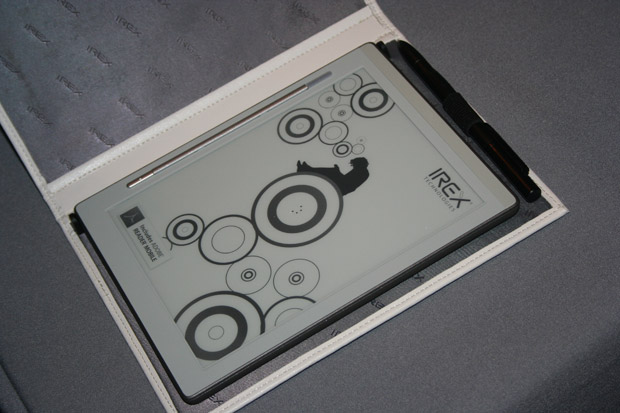 For the thousandth time: perhaps the last bit of tech that genuinely interests me these days (besides video games, but that’s a slightly different category) is the electronic book. For someone with no real business reading book after book about, say, how bankers have ruined the world, or what makes a person violent, or what really brought down WCW, well, I do, and quite often. These books can be damn expensive, too, which is why I like the electronic book. I can hold so many books inside a book-sized device, and the books are often bought cheaper than what have paid for the “real” version. I save space and money. WINNAR.

All that said, today IREX (an offshoot of Philips) announced its very own e-book reader, one that works with the Barnes and Noble e-book store that I talked about a few weeks ago. You can read my reasonably live blog here, but this is a space for my slightly more fleshed out ideas and thoughts. And if you have no interest in reading said thoughts, then may I suggest you, I don’t know, read the latest Dave Meltzer column, or listen to Ron and Fez on Sirius XM.

Put simply, I like it, but maybe I’m biased toward these devices. It’s slightly larger than the Amazon Kindle 2—oh how I can’t wait to see the entirely too predictable “Kindle vs. IREX” articles in the coming days—and lets you do the same thing: read e-books. I think it’s safe to say that Barnes and Noble isn’t some two-bit Internet startup, so it’ll have plenty of support from the major publishers and book industry in general. You get the feeling that Barnes and Noble is to Microsoft as Amazon is to Apple: BN’s been around for ages, and is the de-facto place to buy books in the U S of A, while Amazon is the plucky little thorn in BN’s side, selling essentially the same product (books) in a perhaps more attractive package. Why leave the house when Amazon will ship every book found in its warehouse to your door, often saving you money in the process? (Of course, now that Apple has become something of a jerk, and Microsoft is earning street cred, this analogy may not hold for long.)

That is to say you won’t be hurting for content to put on your reader.

The screen is large (yes, larger than the Kindle 2’s), and is totally readable. I understand that “totally readable” is nothing less than subjective drivel, but what do you want? I could read it in the little display room it was displayed in. The screen is big enough that your not turning virtual pages every 30 words, and the font is legible. I haven’t used, or seen, the device outdoors in the brightness of the sun, so I can’t say whether or not the device would make a good beach pal. My guess is that is would, but who knows. (The Zune HD, as I’ve found out in the past few days, is pretty damn hard to read on a bright, sunny day. So have fun with that one, fanboys.)