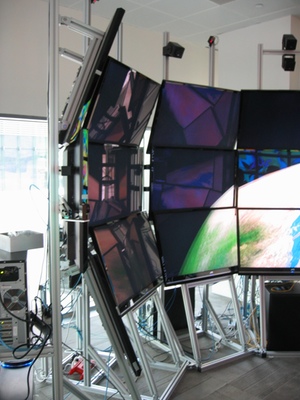 Yesterday I introduced CORNEA, the CAVE system at KAUST. CAVEs are great, but they require a huge investment: you need to build a facility around it, or renovate a space to accommodate it. Then you need to spend enormous amounts of money to buy and install the gear. Wouldn’t it be great if you could have an immersive 3D environment without all that effort? Researchers at KAUST, in conjunction with folks from U.C. San Diego, are doing just that with NexCAVE, a scalable, modular immersion system. In addition to NexCAVE, there’s several other great visualization projects underway at KAUST. 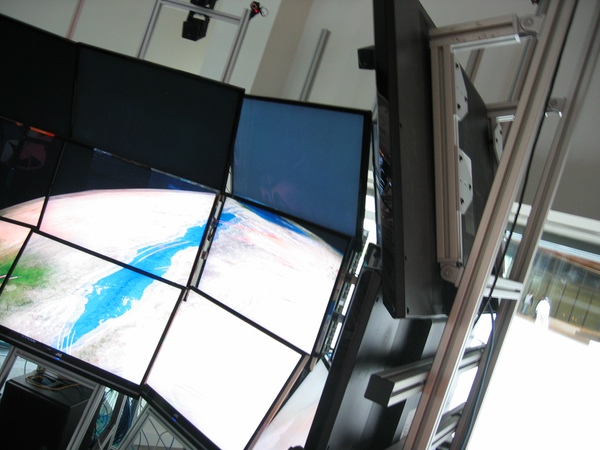 The NexCAVE is constructed from pillars of displays, arranged to overlap one another in a concave form using custom mounting brackets. Each pillar costs about $10K USD, and the system can be built from as few or as many pillars as you need (or can afford). What might you use a system like this for? Here’s a video demonstrating an immersive 3D examination of a desalinization plant:

This technology can also be used for some interesting less scientific applications. The Hajj occurred recently, where Muslims go to Mecca to pray. Only Muslims are allowed inside the Holy Mosque there. Wouldn’t it be neat to get a glimpse inside without having to convert? Check this demonstration out:

And just like it’s big brother, CORNEA, the NexCAVE includes robust audio features, which can be used to augment the perception of data:

In addition to the NexCAVE, KAUST’s visualization laboratory includes a couple of other fancy things. There’s “REVE” (the French word for “dream”, I’m told), which stands for “Rapidly Expandable Virtual Environment”. It uses passive 3D technology — very similar to the kind of thing I saw last year at IFA — to present limited stereoscopic display to a viewer without the use of special glasses. This is a pretty fussy bit of technology, as there’s only so much depth that can be simulated right now, and there’s definitely a “sweet spot” for viewing distance and angle. The demonstration I saw was a little rough around the edges, but is a good portent of things to come. As usual, my little recording won’t do this justice, but here you go anyway!

It’s no small feat to take basically consumer signage grade displays and get them to work in a synchronized tiled fashion like this.

The folks I talked to said that the goal was to keep the visualization showcase constantly updated. Researchers won’t want to always come to the showcase room to do their work, so they’ll eventually purchase some of these systems for their own research labs, allowing the showcase to refresh with newer technology. There’s also some interesting ideas about displaying “digital artifacts” in the KAUST library using these technologies.

Special thanks to Tom DeFanti, research scientist at UCSD, for the NexCAVE videos!