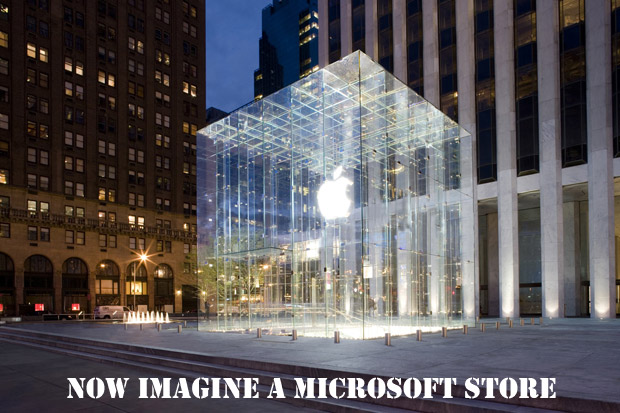 Man, things are hotting up in the Microsoft vs. Apple feud. The latest news is that, yeah, not only is Microsoft planning on, well, ripping off Apple’s retail store model wholesale, but it also plans to hire Apple store employees. Microsoft has offered Apple store managers “significant raises,” and offered to cover any and all moving expenses. For the record, I’d be willing to work in the Microsoft retail store on Neptune if the company offered to pay my moving expenses!

The idea behind all of this, I guess, is to take some of the Apple stores’ top talent, pay a little more, than have then work just as hard to make Microsoft’s stores a success as Apple’s were. Once hired, the newly minted managers have been instructed to bring along their top sales people from the Apple side of things, and turn them into Microsofties.

Seeing as though I don’t own stock in either Apple or Microsoft, it doesn’t affect me in the least what the two of them two to compete with one another. In a sense, this talent drain is a lot like what WCW did in the mid-1990s to WWE/ECW: it has the backing of a giant corporation (Time Warner), so why not offer guys like Chris Jericho and Eddie Guerrero top dollar to head to Atlanta? The Almighty Dollar!

And who among us wouldn’t at least stop by a Microsoft store just to check it out? Considering the amount of money Redmond has to burn—how much money has the Xbox lost in total. and yet it’s still a central pillar of the company?—, I wouldn’t be surprised to see these retail stores do reasonably well for themselves, by hook or by crook, as they say.