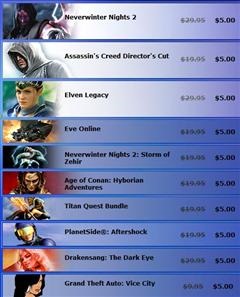 Last week we brought you news of Direct2Drive’s 5th birthday sale-stravaganza wherein various direct-download action-themed games were going for $5 each.

The five-week sale is in its third week, and today kicks off a bunch of RPG and MMO titles for just five buckaroos apiece.

Next week is Indie Games Week, with the following (and final) week being War Games Week.