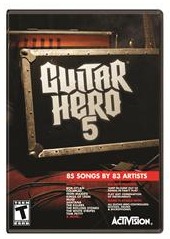 After finally adding some drummy goodness with Guitar Hero World Tour and then issuing the video game equivalent of a greatest hits album, the newest installment of Activision’s wildly popular Guitar Hero series has hit the market.

Many may look at Guitar Hero 5 the same way people look at popular sports games like EA’s Madden series: the core game hasn’t changed that much at all but there are some new features here and there, plus 85 new songs to play and a slightly redesigned guitar controller.

Diehard fans of the series will likely go out and buy Guitar Hero 5 without much convincing, while people who are slowly (or quickly) growing weary of the near-endless crop of music games aren’t likely to find much here to change their minds. So let’s focus on those of us (myself included) in the middle – people who like music games enough to keep playing them but need some good reasons to keep shelling out $60 to $100 every other month (or so it seems).

If you’ve played any of the Guitar Hero games in the past, you’ll feel right at home with Guitar Hero 5 as the basic controls, modes, and features are largely unchanged from past iterations.

As for new stuff, though, the most welcome feature in my mind is that you can play any of the game’s 85 songs without jumping through all the Career Mode hoops first. That’s great because at this point, I’m not interested in career modes for music games any more. I’m 30 years old. Just give me the damn songs so I can RAWK OUT!

So taking the 85 songs from Guitar Hero 5 and assuming you’ll spend $5 to $6 to transfer the other songs over, you’re left with plenty to play with.

The game now also allows you and your friends to play the same instruments, if you so desire. If you’re all hell bent on singing, pick up four mics and sing away. Four drummers, no problem. Four bassists? Lame, but absolutely allowed. You can also join other players mid-song and change difficulty levels on the fly in the “Party Play” mode.

Finally, there are some new competitive game modes: Momentum, Perfectionist, Elimination, Do-or-Die, Streakers, and Pro Face Off. They can be online or in person.

The guitar controller is has technically been “redesigned,” although I didn’t find much about it different than the guitar that came with Guitar Hero World Tour. The buttons are pretty much the same, while the slider bar section has been tweaked a little bit.

I’m always hesitant to rate actual songs as it’s a totally subjective experience, but I can tell you that the track list in Guitar Hero 5 is all over the map. There’s definitely something for everyone here, but whether there’s enough of the same types of something that you actually like will be up to you. I personally don’t care for most of the songs this time around but if you’re looking to play along with friends, everybody will likely have their tastes accounted for.

The songs are all master tracks, which is nice, and the ability to import from the previous two Guitar Hero games along with the playability of previous downloaded songs is definitely a plus.

Yes, there are famous musicians this time around. Kurt Cobain has been resurrected, much to the chagrin of his late wife and loyal fans. Carlos Santana is in the game as well, along with Johnny Cash and a few other familiar faces. You can now import your own Xbox Live avatar into the game, too, so who cares about all these other famous yayhoos? You’re famous! 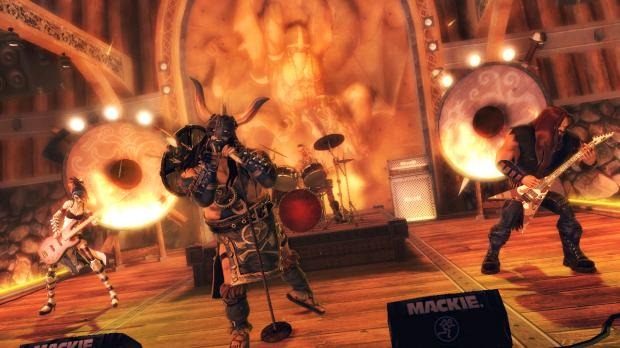 The actual gameplay itself is pretty similar to past efforts, which is a good thing – it just works. Graphics and animation haven’t been overhauled by any means, either. If you were playing the game and someone walked into the room, they probably wouldn’t be able to tell if you were playing Guitar Hero III, World Tour, Smash Hits, or Guitar Hero 5. Activision seems to have found a tried and true formula. So again, not a whole lot of groundbreaking differences as far as the look and feel of the game is concerned, but if it ain’t broke yada, yada, yada.

You like Guitar Hero? Buy this one, especially if you like the track list. If you don’t like the track list, you can stick with World Tour or Smash Hits and not miss out all that much. If you’ve got three friends (lucky!) then the appeal is even greater as the revamped party mode and new competitive modes make the purchase more worthwhile. All in all, though, not much has changed. That’s not meant to be a criticism – it’s just that each successive release seems to be more and more about the actual music. And it’s all about the music, right?