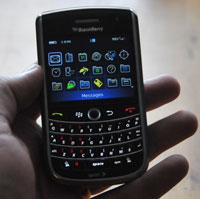 The BlackBerry Tour is apparently being returned in droves. It seems that the trackball is easily mucked up, which requires constant cleaning and sometimes just outright fails. RIM’s recommendation is to clean the trackball with compressed air. Serious. Barron’s quotes a TownHall Investment Research director as saying that Sprint’s return rate on the Tour has “been climbing toward 50%.” Yeah, Waterloo, that’s a problem. Personally I used the Tour for several weeks and didn’t see any trackball issues. Although, my usage consisted of it sitting on my desk and occasionally on the center console of my car as I don’t get out much.