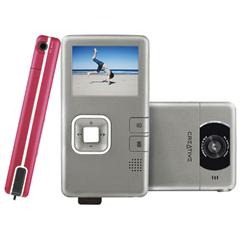 Dell’s selling the Flip Mino-esque Creative Vado for just $40, down from $85. It’s got 2GB of storage, YouTube uploading, 640×480 resolution, and built-in USB connection.

The Vado’s about a half-inch thick and weighs just three ounces. Video is captured as AVI clips using the MPEG-4 codec. It’s not the most advanced camcorder in the entire world, but at $40 it shouldn’t be too hard to coax a few wallets from a few pairs of trousers out there.

Available in gray or pink.