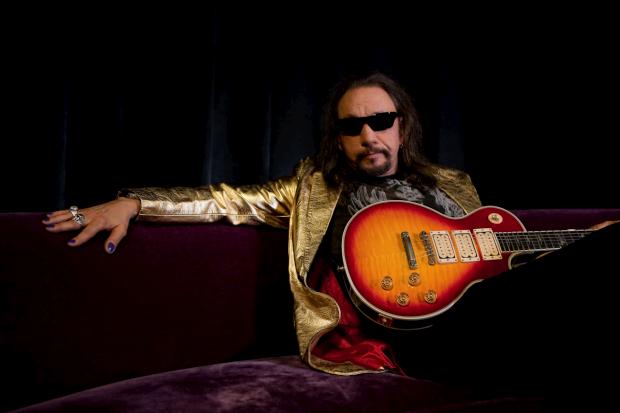 Most gadget do-it-yourselfers have stories of an idea that didn’t quite work out. Maybe the prototype never functioned properly. Or maybe a competitor introduced a similar piece of gear into the marketplace first.

But how many gadget geeks can say that they were stymied by a cult, a laser, and legislative changes?

Frehley’s first album in 20 years is released today as the long-awaited Anomaly hits stores and various outlets like iTunes. It’s a return to the form that made Frehley’s 1978 solo record the most successful of the four simultaneously released KISS spinoff albums. But Anomaly isn’t just a retread of that seventies disc. Instead, it features new techniques from Space Ace such a dropped tunings and a surprising amount of acoustic guitars and clean tones.

Known for his innovative guitar special effects, Frehley has always dabbled in gadgets and electronics. His father was an electrical engineer who passed on a love of circuitry to the young guitar player.

“I think it was in my blood,” Frehley says. “My dad told me that when he was young, he used to make his own batteries. I just inherited his curiosity and his know-how.”

Frehley started by taking apart radios around his Bronx household and when he picked up the electric guitar in his early teens, the instrument soon provided an outlet not just for his musical interests but also his electronic interests.

“I couldn’t put the gear down,” he remembers. “I’ll never forget the day I got my first amplifier that had reverb. I was just so fascinated by it. All the elements were ripe because I loved music, I loved tinkering around and the electric guitar allowed me to do that.”

As his proficiency with the instrument grew, Frehley started modifying the pickups on his guitars, maximizing his amplifiers, and even experimenting with his famous special effects, including the famous smoking axe that was a staple of Frehley guitar solos in the seventies and continues to be a highlight of his performances today.

“The original smoking guitar was nothing more than a smoke bomb inside the volume control compartment of a Les Paul,” Frehley says. “But that ended up screwing up all the volume and tone controls and the pickups. So I got together with one of the engineers on the tour and he built me another box with a lighter in it and we worked out a switch. I didn’t use the rhythm pickups, so we used the volume and tone controls from the rhythm pickup to trigger the bomb and pull back the trap door there that allowed the smoke to come out of it. It’s been an ongoing process and I’ve been perfecting that, making it smaller, more effective.”

Frehley’s massive amount of success in the seventies and early eighties era of KISS enabled him to dabble in computers and other gadgets long before they were fixtures in homes across America.

“My first computer was a Radio Shack,” he recalls. “I think it had 4k in it. That was ’75 or ’76 maybe. Next one I got was an Apple II with 64k. And I’ll never forget the day I went to a computer store up in Connecticut and they had the extension card to bump it up to 128k. That was a big day for me.”

Today, Frehley uses Macs and also has a few PCs networked together for rendering chores. He was responsible for some videos of his bandmates morphing into each other during the 1998 KISS tour for the album Psycho Circus and he has recently been “screwing around” with graphics and modeling software from Maya and Carrara.

He carries a laptop and a BlackBerry to cover his electronics needs on the road. And Bose Computer MusicMonitors allow him to listen to high quality tunes while traveling. “I mean, for the size of the speaker, they’re the most amazing little speakers I’ve heard,” Frehley says.

Frehley intends to debut some brand new special effects as he tours in support of Anomaly. He’ll also be bringing along a new signature series Gibson Les Paul guitar, rumored to be a blue sunburst with lightning bolt accents.

But what about the failed gadget attempt? The one with lasers and all that?

“I had a fiberoptic running through the neck of my Les Paul that connected to a high-powered laser to blow things up,” Frehley laughs. “Right around that time, Blue Oyster Cult had blinded someone with one of their lasers so new legislation came out that limited the amount of wattage you could use in a laser on stage. That was the advent of using rockets in the guitar neck. It was supposed to be a laser beam and then I just went to fireworks.” 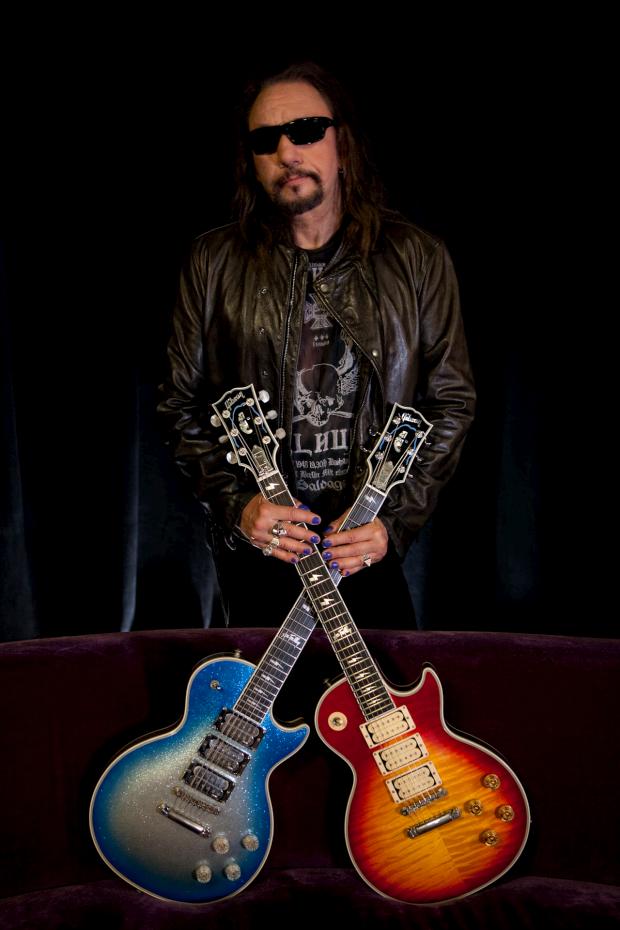