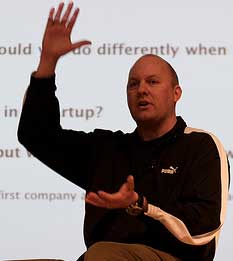 Getting a meeting with Marc Andreessen isn’t easy so I made sure I cornered him and shoved a camera in his face backstage at TechCrunch50 to ask him about his new life as a VC. It’s been seven weeks and one day, and so far, he says he loves it and it’s fun. Of course, as he notes, seven weeks in there’s no expectation that companies will have exited and it’s not enough time for any of them to fail yet either.

Andreessen also reiterated what Ron Conway said earlier: There’s no dearth of funding for good start-ups in the Valley. More on why he did that Skype deal and what he’d rather hear TC50 companies talk about in their pitches on the clip.