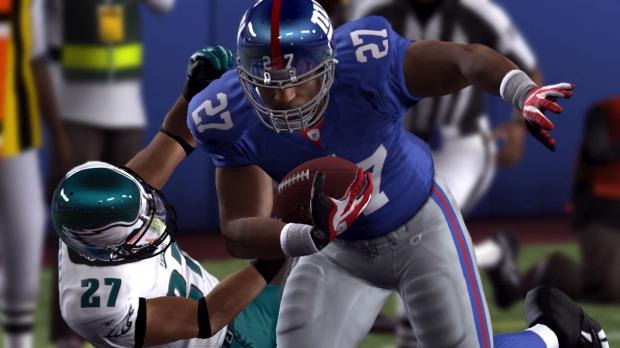 With the NFL season now in full swing, you may be looking for ways to pass the time between Tuesday morning and Sunday afternoon (or Thursdays – stupid Thursday night games screwing up Fantasy and Pick’em leagues the world over). Sure, you could converse with loved ones, do some much needed yardwork, or – gasp!!! – read a book, but maybe you’d find plenty of happiness in the newest console installment of the Madden football franchise from EA Sports.

Quickly: This won’t be an in-depth feature by feature review. The first Madden game came out 20 years ago and, if you haven’t played it by now, you probably never will. This post will hopefully serve to highlight new features and answer the ages-old question that dogs Madden lovers every 12 months: should I buy the new one? Most of you may have already bought it and, if you have, I invite you to leave some thoughts in the comments section.

Also, this is for the Xbox 360 version. The PS3 version ought to be pretty similar, but the Wii version is an entirely different animal altogether.

Ready? Let’s take a look at what’s new this year.

My, oh my is the visual presentation something to behold this year. The animations, the cut scenes, the menus, the pre-game stuff – everything’s super polished. Gameplay is chock-full of nicely rendered players and great new animations, specifically EA’s “Pro-Tak” feature which brings new 9-man gang tackling, button-mashing fumble fights, and stuff like that.

The on-field presentation is very TV-like in that you’ll notice a definite depth-of-field camera style in between plays. Players centered in EA’s “camera,” as it were, are in focus while whatever’s happening in the background takes on a nice, soft, blurry look. It’s a lot like watching a game on high-definition TV, which is very comforting in a weird way.

When you’re running an actual play, you’ll see the traditional view of your players, but when you get tackled, or even a second or two before-hand, the view switches to the TV-style presentation. It’s all very seamless and well-executed. Everything’s like a TV presentation until the moment you get set at the line of scrimmage. You’ll see the sun slowly setting diagonally across the field, players’ helmets and uniforms get scuffed up and dirty, and the cameras even start collecting little rain drops if you’re playing during a storm. It’s all really nicely done.

As for gameplay, EA’s slowed everything down a touch this year, which I’ve noticed has made the running game more engaging. It’s easier to spot holes opened up by your blockers and you’ve now got an extra split-second to set up a juke move or a spin – little things like that. It makes rushing the ball more fun.

Here’s a quick little video showcasing the visual presentation and a bit of the gameplay:

That video is compressed — the actual video in the game is MUCH higher quality.

I’ve started noticing a trend across the past few years of EA Sports titles: the audio presentation is awful. A few Maddens ago, we had a ridiculous lone radio-style broadcaster, last year’s Tiger Woods had some of the worst audio in recent memory with Kelly Tilghman and Sam Torrance (this year’s was only slightly better when Scott Van Pelt replaced Sam Torrance), and this year’s version of Madden could have been something great if it weren’t for all the 90’s-era audio gaps.

Example: The Bears… really are putting on a great show, defensively. Jay Cutler… has a tendency to make some risky passes. Brian Urlacher… almost intercepted that pass.

In-game audio is handled by Tom Hammond on the play-by-play and Chris Collinsworth on the color commentary. Hammond sounds like a robot. A robot: “Here’s a long pass. It’s intercepted. He’s running it back. Touchdown.” No emotion whatsoever and there’s no back and forth between Hammond and Collinsworth – no witty booth banter at all.

Collinsworth is the diamond in the rough with a fair amount of natural-sounding lines, but he suffers from the same audio gap problem mentioned above. It’s almost jarring to hear in this day and age, especially when the commentary from 2K Sports’ stable of games flows so nicely. And after you’ve played through half a season, you’ll start hearing the same lines over and over again. Maybe not even half a season.

John Madden himself has some new one-liners when you invoke the “Ask Madden” feature for choosing plays. They’re pretty neutral, though, nothing too special.

The bigger issue, though, is that the audio sometimes tends to have nothing to do with what’s actually happening in the game. I can’t count the number of times I’ve been up by 28 points and Madden’s said something like, “You can probably run out the game clock now. Remember, they need two scores to catch up to you.” Two scores?

And after a long passing play, for instance, Collinsworth might say something like, “That running back really did a good job of following his blockers and getting downfield.”

Luckily, the audio’s not bad enough to detract from the actual gameplay experience in a significant way. EA really needs to step it up next year, though. It’s pretty embarrassing. If I was on the team that did the audio commentary for the game, I would have asked that my name not be added to the credits and I wouldn’t put it on my resume.

EA’s new halftime show and “The Extra Point” show (available in franchise mode) starring the NFL Network’s Fran Charles and Alex Flanagan take the bad audio, add cheesy video, and run an extra 20 yards with it. The audio gaps are somehow even more pronounced in the half-baked attempt at a SportsCenter-like clips show. You’ll watch The Extra Point once and never again subject yourself to it and you’ll find yourself repeatedly hitting the A button to skip past the halftime show as quickly as possible. It reminds me of cutscenes from a 3DO game.

The actual quality of the cheesy video, though, is outstanding. Chalk up another point for the visual team on this one. It’s really detailed and vibrant.

The online mode is pretty engaging this year. You can play as part of a 32-team online franchise with scheduled matchups, live drafts and trades between other human-controlled teams, and web-based team management, and the co-operative play this year lets you team up with a faraway buddy to take on computer opponents if that’s more to your liking. You could conceivably play Madden online all year without ever playing the single-player game.

I spent a lot of time on the poor audio presentation because I’m a fan of the series and I want the game to be great. The audio’s the major thing holding it back from greatness this year and, as a fan, that’s disappointing. Fortunately, what time EA didn’t spend on audio it spent on the visual aspects. And in that department, the game is wonderful. Plus, as previously mentioned, the audio doesn’t detract from the gameplay experience enough that it should keep you from buying the game. It’s just disappointing, that’s all.

If you’re already a fan of the series or you held off on buying the new Madden last year because you didn’t think there was enough new “stuff,” then this might be the one to buy. It’s an addictive experience with outstanding visuals and an impressive online element that’ll easily keep most Madden fans entertained for quite a while.