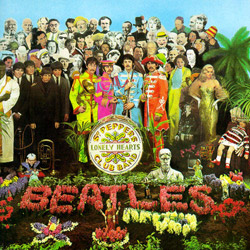 Did Apple swerve us, or are we just a bunch of nincompoops? (I vote for the latter.) So, so many people were expecting to see The Beatles finally show up on iTunes, if not the event itself, yesterday. Nearly 24 hours later, you’re still unable to buy “Help!” from Steve Jobs’ little store. Huge deal, or should we all just move on with our lives? And is the band making a mistake in ignoring the largest music store on Planet Earth?

You all know my opinion when it comes to The Beatles and the iTunes Store: it doesn’t matter to me (and I’d imagine to many of you, too) because I could very easily rip Revolver (or download it from What.cd) and put it on my device of choice. That’s what I said in our live podcast yesterday, that the move to the iTunes Store would be done merely to get a mention on NBC Nightly News at 6:30pm. “In other, non-healthcare news, The Beatles are now available on iTunes . Ask your children and grand-children what that means. We’ll be back, after these messages.”

So, personally, The Beatles not being on iTunes doesn’t affect me in the least. Again, I’m not anti-Beatles, it’s just that I’ve known how to rip a CD for at least 10 years now. (And look, if you’re considering buying The Beatles off iTunes, then you’re obviously not too concerned with sound quality, as you listen on your iPhone in the subway or at the gym. So what if the CDs were terribly processed, you’ll be listening on a cheap portable device on cheap headphones. Real audiophiles would have ponied up for the vinyl ages ago.)

What I would be concerned about, though, is: Is the band making a mistake? The Beatles probably are never going to be hotter than they are this week (save some sort of tragedy), what with the release of The Beatles: Rock Band and that super awesome re-mastered collection. Why not score the hat trick, and put your albums up for sale on iTunes to go along with those other two major releases? My guess is that the band didn’t want to cannibalize sales of the physical album by finally going digital. How horribly short sighted.

Picture this: some 15-year-old kid plays The Beatles: Rock Band with his friend. Do you think this kid has $180 (or $260 at retail) to spend on that re-mastered collection? Nope, but I bet he received an iTunes gift card or two for his birthday.