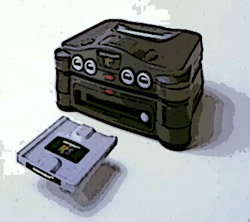 We eulogized the Sega Dreamcast yesterday, and even though today, September 10, isn’t really all that significant in the life of the Nintendo 64, we present to you a photo montage of the life and times of Nintendo’s little system.

In the montage: The Donkey Kong 64 bundle, which I’m not too ashamed to say that I had once upon a time (even though it had a problem with saving games for some reason); the N64DD, which was as big of a flop as I’ve ever seen; Ben Heck‘s portable N64; and the elusive golden N64, which I cannot remember for the life of me.

We had the launch day N64 (and I do mean launch day, my Dad pre-ordered the system quite early) and the aforementioned Donkey Kong bundle. And I had the launch day copy of Ocarina of Time, complete with the now-banned Fire Temple song. I was a baller, basically.