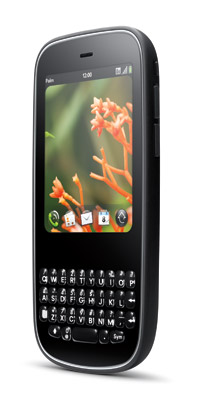 You get the feeling that Palm had something to hide today. On the surface that makes no sense, considering it officially announced the Pixi, the company’s second webOS-based phone, this morning. (The company’s first webOS phone, the Pre, launched to much fanfare last June, owing to an almost Bill Goldberg winning streak-like level of hype.) But as you’re already aware, Apple had an announcement or two of its own today, including the inclusion of a digital camera on the iPod nano. It’s unfortunate, but Apple events are really the black holes of this industry: on Apple event days, no other tech news can escape out into the wild. That is to say, unless your company name is Apple, Inc., you’d be better served laying low for the day, and make any announcements later in the week.

So what is the Palm Pixi? It’s a phone, yes, and one that will be available on Sprint, and only Sprint, before the Holidays. (Whether or not Pixi eventually makes its way to other carriers in unknown right now. Palm’s keeping mum on that type of talk.) Like the Pre (and iPhone), it uses a multi-touch touchscreen interface. Also like the Pre (and also unlike the iPhone), it has a physical QWERTY keyboard. What you prefer is just that, a preference, but let the record show that I do, indeed, fancy a physical keyboard over a virtual one. There’s nothing wrong with buttons, no matter what Steve Jobs would have you believe. The Pixi also supports EVDO Rev. A, so it should be plenty fast for you guys. (Unless, of course, you live in a modern country, with an equally modern infrastructure, and laugh at us poor Americans who have to put up with 3G/EVDO!) It also runs webOS, the same not-too-shabby-at-all operating system found on the Pre. So it’s safe to say, in my brief time with the phone this morning, that if you like webOS and/or the Pre, you’ll probably like the Pixi.

That’s where the similarities between the Pre and Pixi end. And to be fair, those are huge similarities: both use the same operating system (which is a nothing it not functional) and similar touchscreen wizardry, the two most noticeable character traits of a phone, aside from carrier and coverage, something which Palm has little control over. (It can’t help it if Sprint stinks in your area, just like how RIM can’t help that T-Mobile stinks in mine.) The most immediate difference, obviously, is the overall shape of the device. The keyboard doesn’t slide out this time around, but rather is ever present. It definitely feels less, I don’t know, “fancy” to have an always exposed keyboard. It’s sort of like those crazy sports cars that have front lights that recess into the body, versus a standard family sedan.

The Pixi is longer than a folded-up Pre, but not as wide. It’s also lighter by a few grams. So, yes, smaller.

Where did it loose all that girth, if you can even call it that? Well, the screen is smaller than the Pre’s by 80 pixels. In practice, this means that, for example, fewer names can be displayed on a contact list, which translates into one or two more finger swipers per round trip, if you know what I mean. Some aspects of the UI have also been tweaked to accommodate the smaller screen. It’s not something that the average person is going to notice and freak out over, but I’m sure it’ll make a bullet point on some silly cellphone message board argument.

That’s who this phone is targeted at, by the way, more everyman than tech addict. The reason why there’s no fold-out keyboard is to give people immediate access to text messages, Twitter updates, Facebook silliness, etc. (That was one of the complaints I saw during the first round of Pre reviews, that since the keyboard was always recessed, the phone didn’t feel as “immediate” as people would have wanted. The things people complain about, I tell ya.) In a sense, it’s a very capable first smartphone that you might give someone, or recommend they buy. What kills me, though, is that there’s no Wi-Fi.

I repeat: there’s no Wi-Fi. That’s right, a would-be smartphone in 2009 (nearly 2010!) doesn’t have a feature that’s become so commonplace that now even Verizon Wireless phones support it. (Oh, burn!) Does the lack of Wi-Fi kill the experience? No, of course not, but using the debate skills I learned on The Simpsons: Come on. Come on! You cannot market a whiz-bang, golly gee phone today and expect to get away with not including Wi-Fi. At least not from the likes of us. That said, I doubt too many of the everymen who this is targeted at will give a damn, to be honest.

So why did I open this with an ominous phrase? Two reasons. One, there’s nothing really new here, per se; it’s the Pre, just parred down. There’s nothing wrong with that, of course, but we’re all so damn conditioned to appreciate only the shiniest and newest that maybe Palm wasn’t so smitten this time around. Two, as all the Apple haters know, today is unequivocally Apple Day. If Palm was so confident in the Pixi’s ability to “wow” you all, then why would it wait to this week to make any sort of announcement? Push the announcement back a week, and you have the whole tech press devouring every morsel of Pixi news.

As it stands, we’re currently working on post 9 billion on What the iPod Means in 2009, so to say that the Pixi may initially get lost in the shuffle is a bit of an understatement.

So, again, if you like webOS, there’s no real reason why you wouldn’t like the Pixi. And if you don’t like the lack of Wi-Fi or always visible keyboard, that’s why there’s the Pre, which is now $149. Pricing for the Pixi will be revealed as we approach the actual release date, which is currently penciled in for the Holidays.