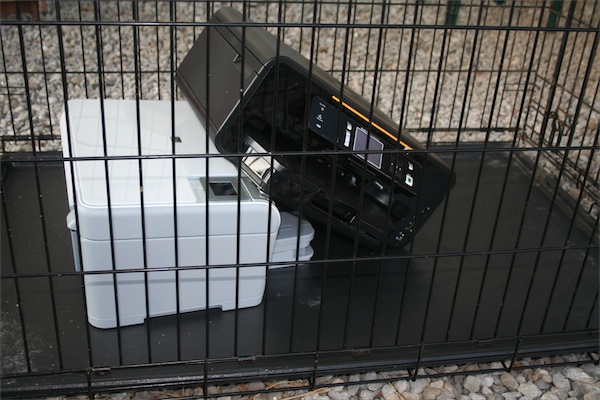 CrunchGear: What? Huh? Don’t make me stop this car!

Full disclosure: Hewlett Packard’s PR team asked us to compare the HP C6380 against the Kodak ESP 7 with the intent of showing HP’s superior quality, in addition to evaluating the cost-per-page comparison. No gifts or money were given to me. I didn’t get to keep the printers, only the photos I printed out.

I’ve long been a fan of HP printers, and when I was a lowly sales clerk at an office supply store all those years ago I would almost always recommend the HP DeskJet 600C over the competing Epson and Canon printers (I told you it was years ago!).

My personal preferences aside, I am a rational adult, and able to read the fine print on marketing websites. So let’s take a look at the claims made by both parties, and see what caveats and exceptions exist. Then we’ll dig into the subjective aspects of both printers.

Kodak throws down the gauntlet
Kodak has a fancy website, www.printandprosper.com, at which they will calculate for you how much money you’re wasting with your non-Kodak printer. According to this site, the HP C6380 costs $221.20 extra per year over the Kodak offering. 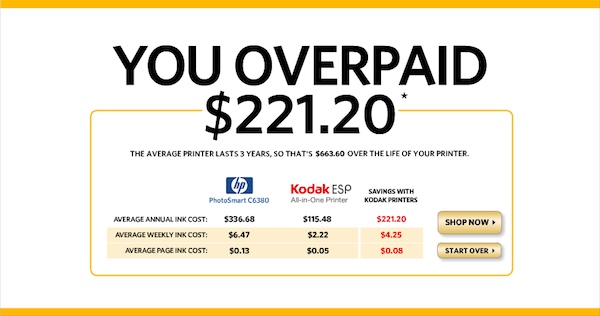 There’s a big ol’ asterisk after that number, and the fine print links to www.kodak.com/go/inkdata, which allows us to drill down to the U.S. detail report.

HP pushes back
The Truth About Printing is HP’s response to the Kodak advertising campaign. It’s a marketing effort, too, so don’t expect to see a lot of nitty-gritty numerical analysis without some clicking. 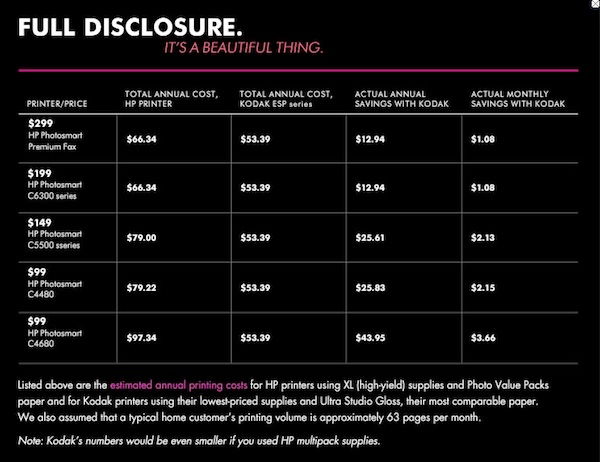 Instead of trying to fight on the cost-per-page issue, which they’ll pretty clearly lose, HP instead claims that their product is superior. Some of the features that HP touts will be pretty compelling to most users. Individual color ink tanks, for example, mean less waste. Some HP features, like Bluetooth printing from iPhones direct to HP printers, are of interest to only limited subsets of users.

Devil in the details
Way back when I was selling HP DeskJet 600C printers, the leading contender was the Canon BJC-600. The HP printer used a tri-color ink tank, while the Canon used separate tanks for each color. At the time, I let my passion for HP products influence my salesmanship, and I steered many a customer toward the tried-and-true DeskJet, even though the Canon afforded a more economical long-term outlook. If you use a lot of blue ink — because your company logo is solid blue, perhaps, — the separate ink tank design will allow you to replace just the blue ink when it runs out. When you run out of blue in a tri-color tank, you end up throwing out perfectly good ink just so you can insert a new tri-color cartridge to replenish your supply of blue.

The HP C6380 uses five separate ink tanks: cyan, magenta, yellow, photo black, and regular black. When you run out of one, you only need to replace that one. The Kodak ESP 7 uses two ink tanks: a five color tank and a black tank. If you exhaust all of one color, you’ll need to replace all five colors, regardless of how much may be left of those other colors. It may well be cheaper to replace the five color tank every time, but is that the kind of wasteful behavior you want to encourage, let alone participate in?

The other major difference between Kodak and HP is the kind of ink they use. Kodak uses pigment based inks, while HP uses dye based inks. Both produce great results most of the time, and ink type alone probably shouldn’t be a determining factor when selecting a photo printer, but there are some differences that are worth exploring.

Objective tests
Did you know that the ISO — the International Standards Organization — actually has tests for photo printers? ISO standard DIS 18935 is “Determination of indoor water resistance of printed colour images”. The test basically involves submerging a photograph in water for 60 minutes and seeing what happens.

So what happens? The Kodak pigment based printer ink is susceptible to water. A single drop of water on the photo is enough to remove substantial amounts of pigment, effectively ruining the photo. The HP ink, which is dye based, is not affected by the drop of water at all. No amount of smudging or scrubbing resulted in any blemishes. 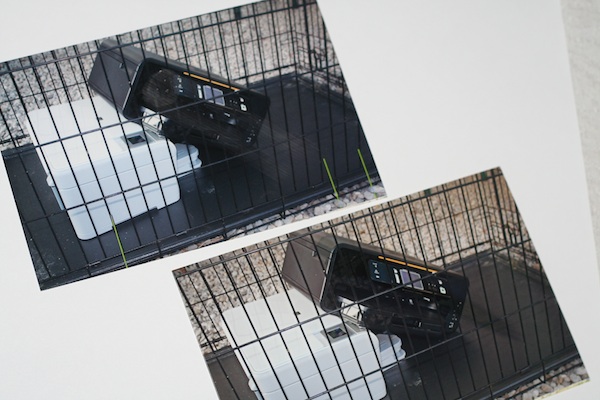 The Kodak print is on top, and you can clearly see the blemish left from smudging a single drop of water. The HP print, below, shows a slight streak, but that faded as the water dried.

Submerging both photos in water for even a minute is enough to see the damage that can occur. The Kodak paper curls pretty badly. And the pigment suffers from water as just described. The HP paper retains its form, and resists the adverse effects of water. 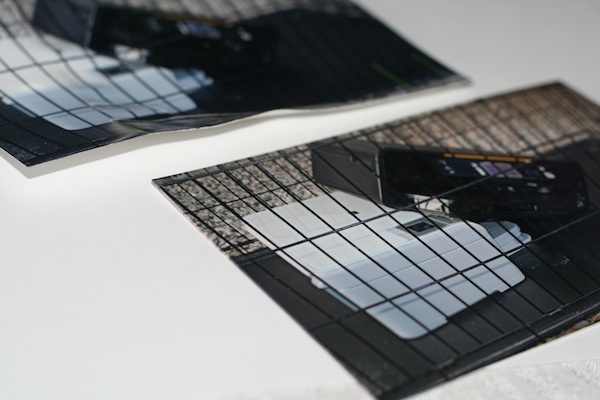 The Kodak print, at the top, curls pretty badly after only a minute in the water. The HP paper stays firm, and holds its shape.

Subjective tests
I printed a lot of photos from both of these printers. The truth is that the output quality of each is superb. There are modest differences that result from pigment versus dye based inks. To my eye, the pigment based inks generally produce deeper blacks, but as a result they tend to lose some details in the dark portions of photos. For example, the photo in the top of this post: the Kodak printer is black, and when printed on the Kodak printer it looks sharply black. The same photo printed on the HP doesn’t look quite as black, but I can see more reflection on the surface of the printer — a detail which is lost in the Kodak print. 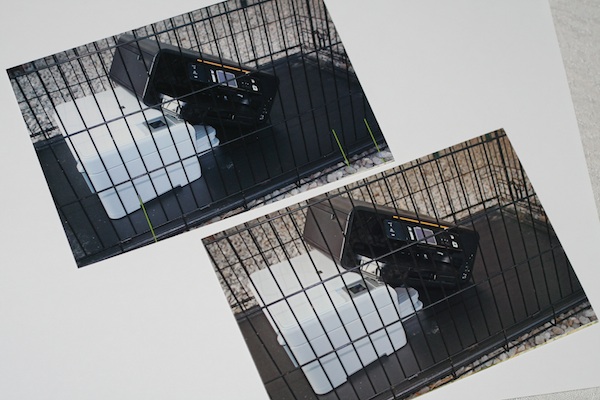 I actually like the HP print better. I like seeing the details in the photo. As an amateur photographer, I like knowing that some of the nuance I see in the lens will be reproduced in the print out. My lovely wife prefers the Kodak print, claiming that the colors are sharper. Who am I to argue with my wife?

I found the Kodak Windows driver to be much better than the HP, though. This has nothing at all to do with cost per page or output quality, but should be a concern when selecting a printer. I hate printer drivers that take over your computer, and ruin your life with popup reminders about your printer. The Kodak driver had a much smaller footprint, and was much less invasive.

For the average user, both printers include software to touch up photos before printing them. For the sake of completeness, I polluted my system with these applications, so that I could include their utility in my discussion. Both did a perfectly fine job — basically just auto adjusting the color levels, which you can do yourself in Photoshop or the GIMP. The Kodak touch-up process was remarkably faster, though. It brightened up the photos and sent them off to the printer in no time at all. The HP software churned and churned, finally showing a slightly enhanced version of the photo, which I was prompted to save as a copy before sending to the printer.

A word of advice: please show your family members how to use some dedicated photo editing software — Photoshop, Photoshop Elements, GIMP, Acorn, heck even Picnik — so that they can adjust colors and crop photos on their own, without using the half-baked software usually included with the printers.

The Bottom Line
As I’ve said several times, I like HP printers. I buy HP printers myself. It’s just something I do, the way my dad only buys Ford automobiles. My preference for HP does not prevent me from recognizing good stuff from other vendors, though. The Kodak ESP 7 — and presumably most of the other Kodak printers on the market today — is a perfectly acceptable printer. Were I to receive one as a gift, or if it were the only printer available for me to buy, I’d be completely satisfied with it. Output quality is good, print speeds are impressive, and the overall featureset is noteworthy.

I’m as leery of Kodak’s marketing claims as I am of HP’s rebuttal claims. Cost-per-page is an important consideration when buying a printer, but it’s not the only consideration. If cost-per-page were the only thing that mattered, we’d all print our photos at the nearest drug store, or Wal-Mart.