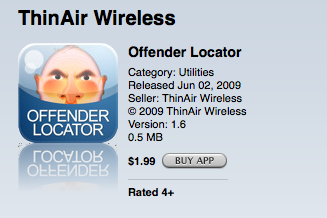 If you haven’t been following the whole story of Offender Locator, the iPhone app for locating sexual predators around you based on location, let me quickly run it down. ThinAir Wireless released the app, and it immediately became very popular, a top 10 paid app. Then it vanished from the App Store. The issue that Apple apparently had with it, was something we mentioned in our initial post on it after several commenters had, the legality of selling data about sex offenders.

Specifically, the issue was the selling of this data in California, so ThinAir removed the California data from the paid version of the app (it’s still available on the free version), and Apple let it back in the store. But ThinAir wasn’t sure that it had to actually do that, so it contacted a privacy lawyer. His conclusion: “I know of no law in California which states that criminal information made public by the state of California that is compiled into a database cannot be sold to the public for profit.”

ThinAir Wireless has submitted an 11 page letter of opinion to Apple written by the attorney on the topic. Included in it are many comments from our original post, including this hilarious one. We’ve embedded the entire document below.

To be clear: This is just an opinion letter at this point, there is no threat of a lawsuit. But it has now been over a week since ThinAir submitted the letter to Apple and it has yet to hear a response. Meanwhile, Offender Locator remains for sale in the App Store [iTunes link], minus the California data. Obviously, it’s ThinAir’s opinion that it should be allowed to reinstate that data, and clearly the application is hampered without it.

While ThinAir seems to believe our post on the matter (and specifically the comments about it) forced Apple’s hand in pulling down the app, several other outlets covered this angle as well, and we’d have to believe that Apple would have its own legal team review such an action before it took any.

Still, we continue to watch this story with interest — particularly if an iPhone app and the comments on this blog help to set some kind of legal precedent.