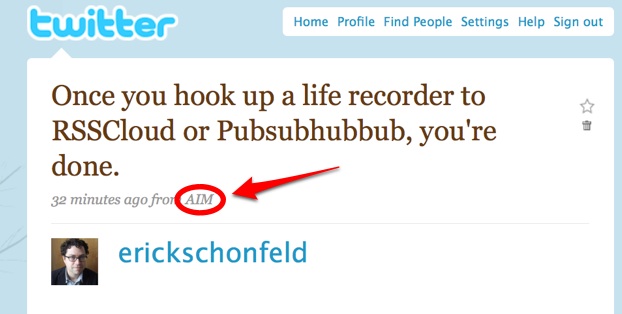 In July, AOL Instant Messenger (AIM) embraced the stream in a new beta (for both Windows and Mac) and started moving beyond simple IMs. You can now see your Facebook and Twitter feeds, along with AIM buddy updates and feeds from other services.

The problem was that the Twitter and Facebook feeds were only one way. You could read them, but you couldn’t send updates from AIM to the other services. A few weeks ago that changed, and AIM status updates can now appear as updates in Facebook and Twitter as well. There also appears to be a way to comment, or respond, inline to other people’s messages, although I am having trouble getting that feature to work for some reason.

Going both ways turns AIM into a full-fledged Twitter/Facebook client. It is a big deal for AIM because now it can be used as both a private and public IM client. While stream readers such as TweetDeck and Seesmic already have two-way messaging capabilities with Twitter and Facebook, Yahoo Messenger and Windows Live Messenger are still stuck in Read-Only Land.

The AIM Beta doesn’t have the Twitter integration working perfectly yet. Some updates and comments seem to never get through, while others do just fine. On the Facebook side, it is working much smoother. But AIM is making the right moves in an attempt to become an all-in-one instant communications hub. AOL’s new communications chief, Brad Garlinghouse, should keep pushing in this direction.