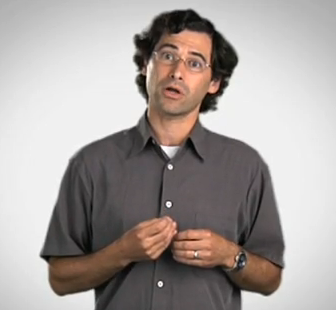 It’s pretty easy these days to think of AT&T as a giant corporation of demons sent to Earth to destroy iPhone users’ productivity. But apparently, it is a company just like any other, with humans working for it. How do we know? There is video evidence.

Apple 2.0’s Philip Elmer-DeWitt posted a video of Seth Bloom today, an AT&T rep that is also know as “Seth the blogger guy.” In this video, Bloom explains AT&T’s iPhone MMS service, which was finally announced the other day (set for September 25), as well as some of the issues that plague AT&T’s network due to his smartphone usage (read: iPhone usage).

We’ve actually been working with Bloom for a number of months as AT&T issues have continued to mount. He’s quite helpful in answering the questions that he’s allowed to answer, which we appreciate. The problem Bloom has is that he can only answer questions, he can’t actually solve AT&T’s problems. And while the network is trying, it’s still not where it needs to be in many regards.

But that’s why these videos are good, they humanize AT&T. Rather than having us cite an AT&T spokesperson talking about the issues they’re facing, it’s good to put a face to the problems. Again, this doesn’t solve them, but hearing them explained from AT&T is a smart play. Certainly smarter than saying nothing.

Of course, as Elmer-DeWitt notes, Bloom has actually been doing these videos for a while, but when AT&T starting running into some reason problems over the summer, he went silent. Now he’s back that AT&T has some good news to offer (MMS). If anything, we could use these videos more when AT&T is having issues.

Speaking of those issues, PC World has a rather ridiculous headline today, “Network Woes? Hate the iPhone, Not AT&T.” The main idea is that it’s the iPhone fault for AT&T’s service issues because it’s so popular and is overloading their network. That’s undoubtedly true, but it completely skirts around the fact that we’re all paying a large amount of money for a service that is completely unreliable.

It would be much easier to cut AT&T a break in that regard if they were to say, offer up discounts to paying customers for poor service performance. It’s simply hard to feel bad for a company you’re paying in excess of $100 a month to, for a service they’re failing to provide.

It’s certainly a fair point that the massive success of the iPhone likely would have overloaded any company, including Verizon. But if anything, that speaks to why we need to get rid of the exclusivity agreements.