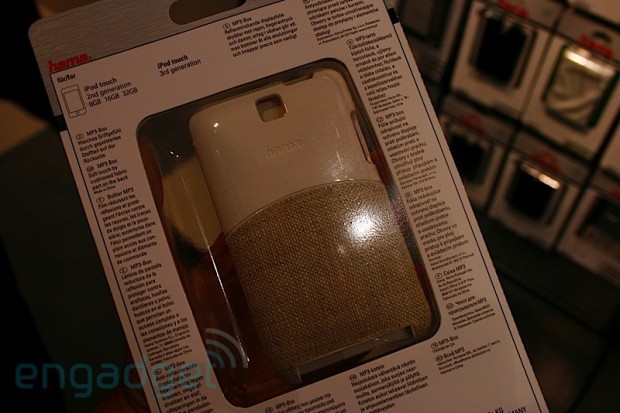 Them Engadget boys went for a walk in the outer reaches of IFA and came up with the some iPod cases with holes in the back for a camera. As I’ve said before I have no idea what is going here. Apple’s non-disclosure language probably explicitly prohibits these from existing and, more importantly, these companies will probably never get Made for iPod certification after essentially outing Apple’s future plans.

What I suspect is that case makers are hedging their bets and they have good reason to do so. Our own sources have reported extensively that the new iPods will have cameras and clearly this news is currently percolating in the Chinese factories where this stuff is made and is being accepted with a surety that ensures us that the rumors or true.

Case manufacturers often build items on specifications supplied to them by Apple at the very last minute. This is why you’ll see lots of renders of iPod and iPhone cases minutes after the product launch but will never see shipping product until a few weeks later. This lead time, however, shows that case makers expect to make a killing when folks flock to upgrade their iPods and suddenly find that they’re cases aren’t hole-y enough.