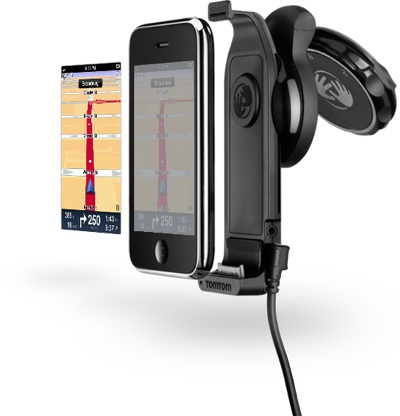 So we knew it was coming; the TomTom GPS car kit was going through the FCC, the software was released on the App store. It was just a question of when. The bad news is, the when has changed.

TomTom makes some brilliant GPS software and hardware, but they really came under quite a bit of fire about the performance of their iPhone app. People were complaining that it really wasn’t up to par with the rest of their product line. This has forced TomTom to bring some more information to light, information that they were no doubt trying to avoid releasing.

It turns out, the software (that you can get now) crunches the numbers from the GPS. The GPS signal however, is supposed to be coming from the TomTom car kit hardware, not the admittedly lower quality GPS chipset that comes standard in your iPhone. That car kit has been delayed until this coming October.

TomTom wasn’t expecting to have their software approved and released to the app store so quickly, and that has caused some of the issues that people are reporting.