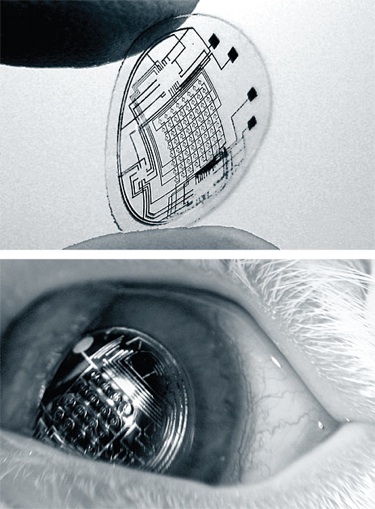 Electronic contact lenses? Sure, why not? Developed by researchers at the University of Washington at Seattle, the lenses are kitted out with all sorts of built-in electronics and an LED. The uses right now for such lenses are fairly limited, but in the future you can expect things like internal body monitors (blood sugar level reporting is the given example), translation, and, yes, improved gaming. Oh, the days when being a low ping bastard was your biggest advantage!

Says one of the folks involved:

To turn such a lens into a functional system, we integrate control circuits, communication circuits, and miniature antennas into the lens using custom-built optoelectronic components. Those components will eventually include hundreds of LEDs, which will form images in front of the eye, such as words, charts, and photographs. Much of the hardware is semitransparent so that wearers can navigate their surroundings without crashing into them or becoming disoriented. In all likelihood, a separate, portable device will relay displayable information to the lens’s control circuit, which will operate the optoelectronics in the lens.

In other words, these lenses are just a little more complicated than your average contact lens.

Here’s a fun scenario. Some time in The Future, you’re on vacation in Europe, but you can’t speak the local language. Let’s say you pick up a copy of A Bola, and want to read about how terrible Benfica will be this year. But who speaks Portugese? (I do, but whatever.) Activate your contact lens, and the headline “O Benfica perde outra vez” becomes “Benfica loses again.” (I was actually a Sporting season ticket holder last season, so it’s my duty to hate Benfica.)