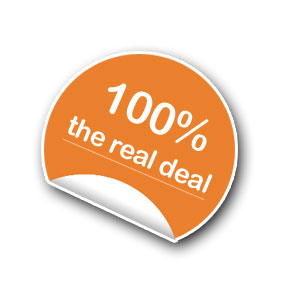 So my “hands-on” post was really more of a “quick look” or a “look at some sample images” post than a hands-on you’ve grown accustomed to from CG, so I thought it wise to have a real hands-on of the Pentax K-7. I’m a Pentax user and I let the fanboy in me get the best of me. Apologies. Now here’s the real hands-on, but before we jump into that, here is the full spec sheet of the K-7 that was used over the weekend at the Red Bull Indianapolis Grand Prix. 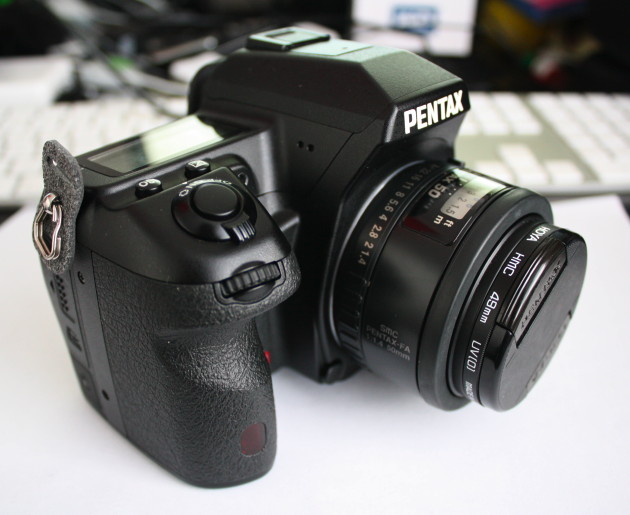 Let’s start with the “compact, magnesium alloy body” because most cameras are initially judged by specs and how they feel. The K-7 has significantly more weight than previous DSLRs that I’ve handled from Pentax. To be specific, it weighs roughly 26.5 ounces with the rechargeable Li-ion battery compared to that of the K200D, which weighs 24.3 ounces. As you can surmise, it’s a bit of a lump in the hand, but it’s well balanced. The groove in the grip for your middle finger ensures a firm hold of the body, but it could have protruded out a little further for an even better grip. I can usually carry the K200D without a strap and not worry about it being easily knocked out of my hands, but I’m not as comfortable going without a strap on the K-7. And I don’t have the world’s largest hands either. 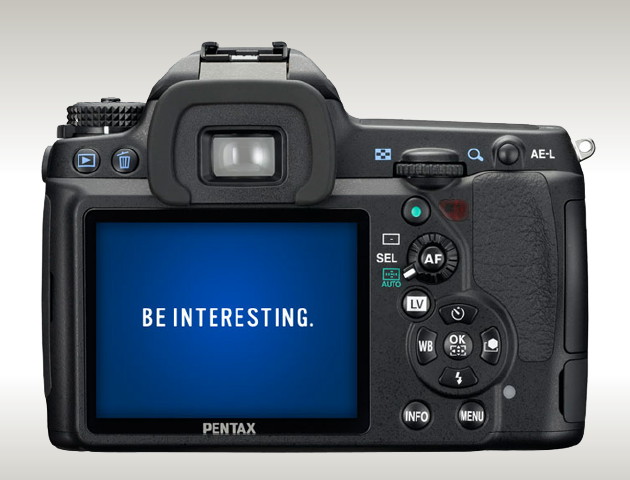 Buttons and controls are well laid out on the rear of the K-7 and it may be construed as a drastic change from previous models in the Pentax lineup such as the K20D, which the K-7 now replaces as the premier SLR in the family. The same can be said of the UI, but we’ll get to that in just a bit. The playback and delete buttons have been moved to the left of the viewfinder to allow for a 3-inch LCD. Said LCD is bright and vibrant and offers viewing angles from every which way. The K-7 now includes a dedicated Live View button and Green mode button. White Balance, Flash, Drive Mode and Image Tone have been given dedicated buttons and the Menu and Info buttons have been moved from the left hand side to the lower right below the aforementioned buttons. 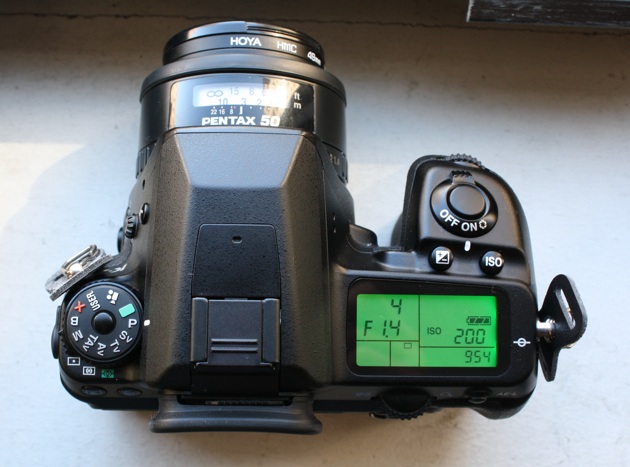 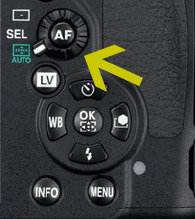 Adjusting the AF point switching dial can lead to inadvertly turning on Live View mode and it’s a bit stiff so be prepared to dedicate a few minutes to adjust how to turn the dial without pushing the LV button. Pentax also decided to move the EV compensation button up top next to the ISO button.

Also new to the K-7 is a mode dial lock button that must be depressed while switching modes. It can be cumbersome when trying to switch modes quickly, but it also eliminates the chance of switching modes inadvertently. Other than that, there isn’t anything new when it comes to this area of the camera so let’s move on. 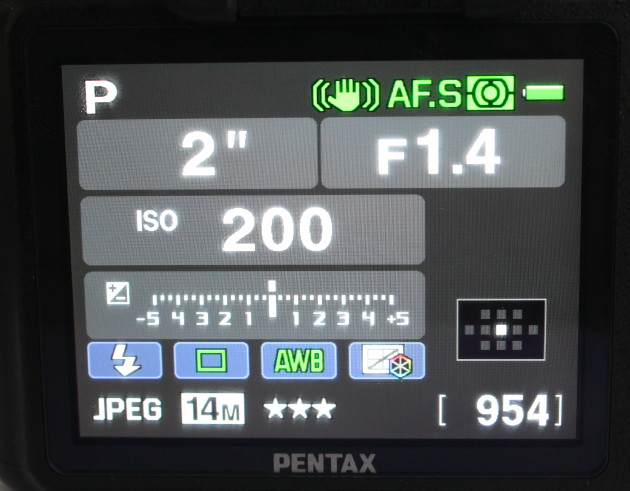 Starting with the K2000, Pentax drastically overhauled their UI and I initially found it awkward, but it’s much more streamlined with the way the hard buttons have been laid out. It’s also far more intuitive than the UI found on the K200D. Unfortunately, I haven’t had any time with the K20 so I can’t compare the two. I haven’t even begun to dip into the menu system and tweak things around to my preferences and just started shooting with it right out of the box. We’ll have more on this in the review.

I found the following features to be useful while shooting over the weekend: built-in level, auto-rotating menu and the AF assist light. Speaking of AF, the K-7 is much, much faster at locking on than the K200D and the 50mm f/1.4 that I primarily use with the K200D feels alive. However, I did notice that the K-7 struggled to lock onto multiple subjects even in continuous AF mode and would focus in on something stationary that didn’t seem to be focused on from my point of view. I can’t pass judgment, though. It could have been user error and I’ve only had the camera for a few days. We’ll investigate this further. I should also mention that the shutter is much more quiet than in previous SLRs from Pentax.

HD video has finally come to a Pentax DSLR, which is great and all, but why not go with full HD when competitors have been touting 720p capabilities for months. Hell, look at the Canon 7D that was just announced. As a consumer in the market looking at high-end DSLRs, I’d probably go with the 7D because for $400 more I get a rig that shoots in full HD regardless of everything else the K-7 may offer over the 7D. Either lower the price of the K-7 down to $999 or offer a badass rig that rivals the big boys, Pentax.

But I digress. A total of two videos were shot over the weekend and this was the best of them. This is just a sample that I shot during the practice round with the 300mm telephoto. You can imagine how difficult it is to manually focus such a large lens without a strap or monopod. User error, I know. Again, we’ll work with the video mode a bit more extensively for the full on review. 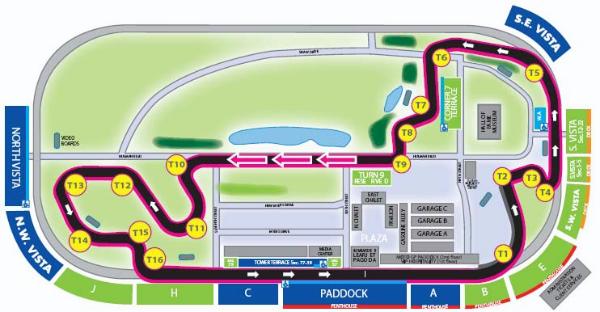 And now the sample images taken with the 300mm lens from yesterday’s post. The first and last were shot way atop the Penthouse E level at turn 1 while the second and third were taken from the turn 2 shooting pit. I’ve never photographed a race before, but I don’t think they’re horrible. 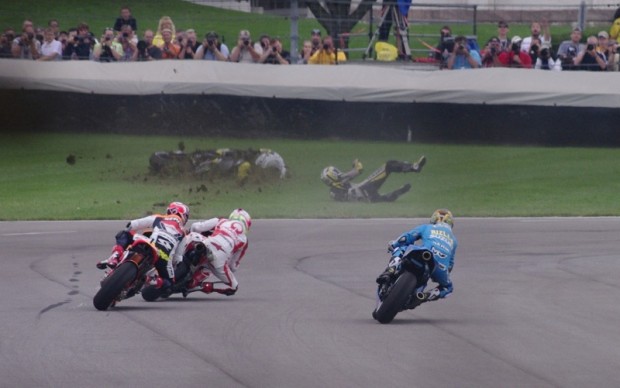 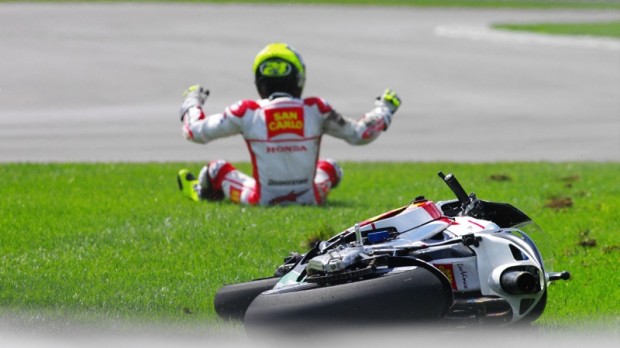 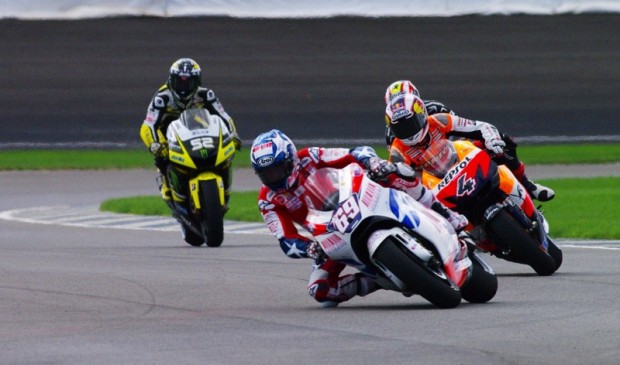 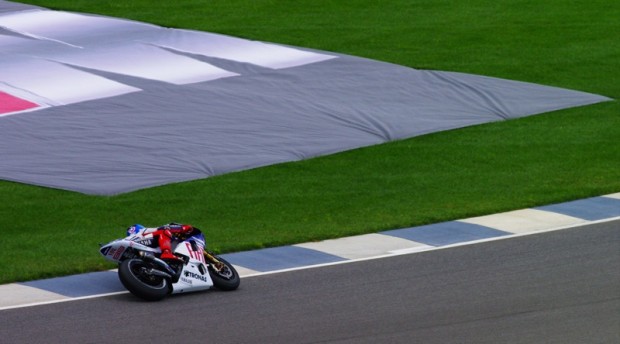 A few things that I wish were different based on my initial hands-on with the K-7 that others may or may not agree with. The 3-inch LCD is bright and the viewing angles are tremendous, but like any other LCD, it smears from body oil and it’s a pain in the ass to clean. How about an oleophobic screen? It makes perfect sense, right? Easy to clean and I doubt any photographer wouldn’t want one. An AF-L function would have been righteous, too. AF in movie mode would have been the killer feature on the K-7.

Again, this is the real deal hands-on and not me spouting off like a fanboy. Hope you enjoyed.