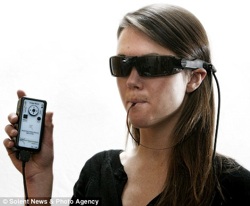 Invention of the year? Quite possibly! It’s the BrainPort, and it, in effect, gives blind people the ability to see by using the nerve endings on their tongue. It sounds weird, yes.

Here’s how it works. A small digital camera takes pictures of, say, a Stop sign, then turns that photographic information into raw digital pulses. These pulses are then sent, via that sunglasses-looking wire thing, to your tongue. Apparently the nerve endings on your tongue are such that your brain can interpret the pulses as images. A your mind’s eye sort of thing.

And while the technology won’t mean that blind people will be able to read, say, The Decline and Fall of The Roman Empire, it will permit them to “see” smaller things, like road signs and basic shapes. Only about 20 hours of training is required for the user to become proficient. So, after just a few hours per day, users will be doing what they never thought possible: seeing!

This isn’t some crazy pie in the sky concept, but an actual device. In fact, it’s scheduled to go on sale later this year. It won’t be cheap though, at nearly $10,000 per device.

And to give you an idea of just how powerful this device could be, one of the trial users was said to have actually cried upon seeing his first letter.

Thumbs way up from me, that’s for sure. Lord knows with my atrocious vision I’ll be blind by age 30.

BrainPort was developed by the good folks at Lighthouse International.