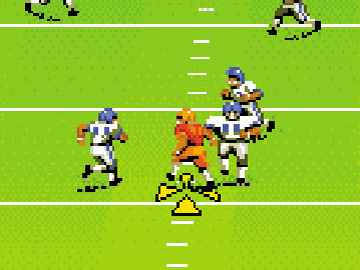 Great article over at Edge Online for anyone interested in the early days of EA’s John Madden Football franchise. Did you know that one of the first versions of the game was initially 7-on-7 due to memory limitations? Madden himself put the kibosh on that one right away, saying, “What’s this seven-on-seven? This isn’t football. If my name’s going to be on something it’s got to be 11-on-11.”

Other little gems include actual NFL players calling up EA to complain that their in-game characters weren’t good enough. Except for Jerome Bettis, that is. He called EA and said, “I’m playing the game and I appreciate what you guys did but you made me too good.” And in later years, EA “hired an engineer with a PHD in flocking behaviour to design algorithms where players would converge on another and tackle him.”

Good stuff all around, especially if you’re an old-timer like me and remember playing Madden on the Sega Genesis way back in the 90’s.