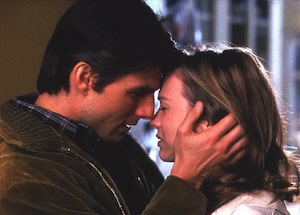 I do my fair share of complaining about poor service. And if you follow me on Twitter, you might say that I do more than my fair share. Here’s my issue: It’s not so much that your service sucks, it’s that you refuse to be held accountable for it sucking, and rarely, if ever, do anything about it. I’m looking at you, Comcast and AT&T. That’s why it’s so perplexingly wonderful when a company does the right thing, like Netflix.

Tonight, Netflix emailed a large number of its subscribers to apologize for a Xbox Live streaming outage that occurred yesterday. They’re offering to refund 2% of users’ monthly bills back to them, if they simply click on the link that was emailed. It’s not a lot of money, but what’s remarkable is that Netflix did this for most of us completely unprompted.

Now, I’m sure someone somewhere complained, but rather than either arguing with that person or just quietly giving them some sort of discount, it looks like Netflix just emailed everyone that could have possibly seen this hiccup in service, and offered a refund — including users who didn’t suffer through it at all.

Refunding 2% of a monthly bill to all of these users will probably add up to a decent sized chunk of change (assuming a large portion of users click on the link), but the positive reaction they’re getting for the move on places like Twitter (and yes, this blog), has got to be worth more than whatever they’re paying. In a time of poor tech customer care, Netflix is the sterling example of how do it the right way. 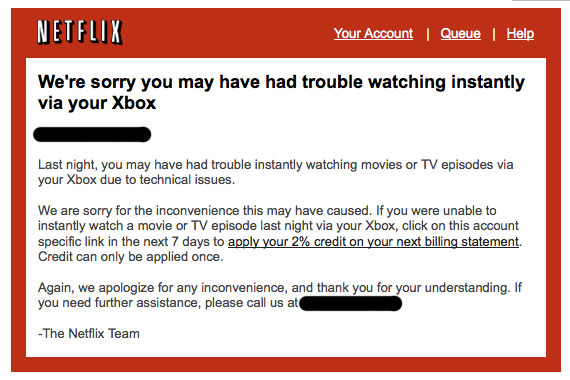 Last month, we covered a Netflix internal presentation on how the company is run. It is simply an awesome guide that not nearly enough companies are anywhere close to following. It’s baffling how Netflix could be doing things so right, while there are so many companies out there doing things so wrong. It’d be one thing if Netflix wasn’t successful, but it’s extremely successful.

I’ve had basically no service from AT&T for large portions of my day in various parts of San Francisco for two months now. Do you think I’ll ever see a dime back from them? And before I just recently quit Comcast, my service would go out almost everyday without fail. Did I get an email apology and a refund? Nope. Maybe if I bitched loud enough for long enough, I could get something back from those two companies, but the point is that maybe I shouldn’t have to.

Netflix emails me from time to time to see about my movie streaming quality, and also to see if movies I’ve rented through the mail appear on time. If they don’t or the quality of my movies is poor, they apologize. That’s all I want. The refund is just icing on the cake. Too many other companies not only give you no icing, and no cake, but they steal your cake, punch you in the face, and then blame you for the whole ordeal.

But when it comes time to renew my plans with those companies, guess which one I’m going to stick with? Netflix. Companies often seem curious how other companies get “fanboys” — this is how.