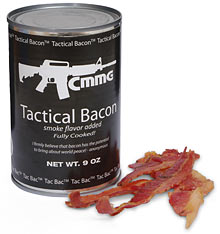 Most things just aren’t built to last these days. Computers, cell phones, vehicles, televisions — good luck getting ten years out of any of them. Then there’s Tactical Canned Bacon. It’ll last for ten years. Ten. Years.

At $16 per can for 50+ slices, you’d probably be able to survive underground for at least a little while. Maybe just buy as many cans as will fit in a backpack for the next time the sun gets blocked out by some giant spaceship. That, or December 21, 2012. Whichever comes first.

No word on how the stuff actually tastes but by the time you open the can, it’ll probably be far too late to return it. Plus, bacon’s pretty much delicious in any form.