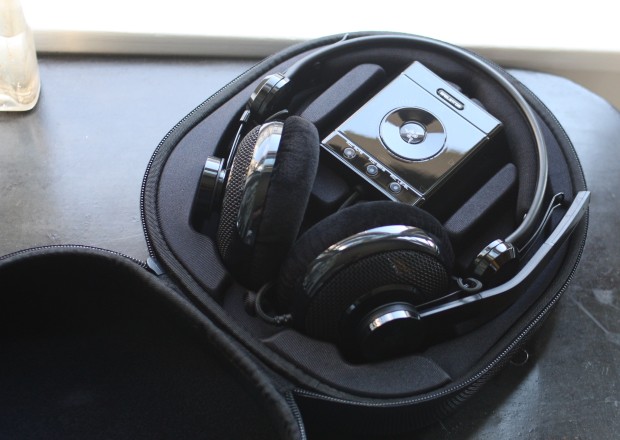 I saw a prototype of this headset at CES and was excited for it then. The Carcharias headset hit first (a replacement for the duh, Piranha) and now we have the Megalodon, its surround-sound-enhanced sibling. If the images look familiar, it’s because the two headsets look identical; it’s the interface and insides that are different. The Megalodon is a virtual-surround headset like the Logitech G35 or Astro Gaming A40. Tritton’s AX Pro differs from all these in that it’s true surround sound, not virtualized, but a lot of companies are standing by virtualization and even Tritton is getting into it now. So how does the Megalodon stand up against such distinguished company?

The fit of the headphones is exactly like that of the Carcharias headset, which is a very good thing. Of all the headsets I have (and trust me, it’s a lot), the Megalodon is the most comfortable. It’s even got a slight edge on the Carcharias in that it doesn’t have a cord pulling down one side (we’ll get to that). The Megalodon has the same lightness, excellent padding, and soft materials as the Carcharias, and it’s a joy to wear for long gaming sessions.

Since the headset’s design is unchanged for the most part, the newness must lie elsewhere. And indeed, the whole interface has changed: the Megalodon connects via USB, and there is a little… something in between. I guess you could call it a puck, though it’s a bit big for that; it sits on your table or desk and has all the controls for the headset on it. The short cord between it an the headset means you’re not likely to get it tangled on anything, and you’re not dragging six feet of cable whenever you move your head. I find it liberating.

The USB interface is handy because, obviously, you can plug it in just about anywhere (as opposed to the back of your tower, like I’ve been doing for, oh, five years). Hardly a unique feature, but it’s better than the triple-analog system on the otherwise-excellent Tritton AX Pro or even the Carcharias, which unless you’ve got mic and audio ports handy, you have attach to your sound card. 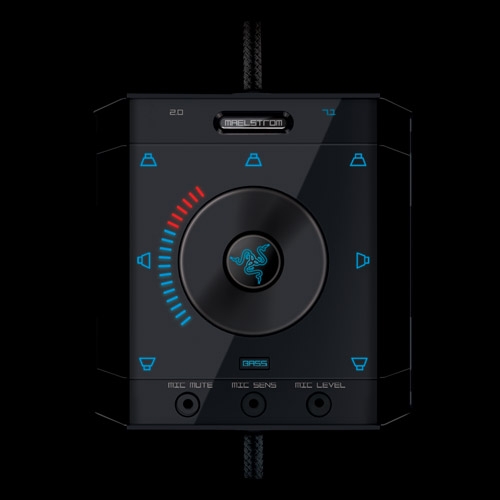 So what’s on the puck (I forgot to take pictures so here’s their shot)? Well, it’s a lot like the AX Pro’s in-line remote. It lets you switch between virtualized surround and regular stereo, adjust the levels of each of the channels, and change the mic level and sensitivity. Basically you’ve got a few buttons and a wheel; it looks daunting at first, but it’s pretty intuitive after you’ve used it for a few minutes. Turning up the bass and, say, rear channel, is extremely easy. The backlighting even turns red past a certain point to give you a sort of bearing. It remembers your settings universally, though there are no presets for different games. I found it convenient and precise.

My question, however, is this: why isn’t there a button to just completely turn off the headphones? That way I could plug them in the back of my PC and forget about it. Turning them off completely would return sound to the normal drivers and I wouldn’t have to be constantly wrapping them up and putting them away — they could just live on my desk.

That the Lycosa has no GUI is, I think, a benefit. Like the AX Pro, all your audio needs are attended to by the puck, so there’s no reason to have a configuration window. It also means there are no drivers to worry about. Bonus!

Of course, the most comfortable and convenient headset is useless without good sound. Fortunately, that’s not a problem for the Megalodon for the most part. The stereo output is perfectly good, much like the Carcharias. Nice and balanced, with the added bonus of being able to adjust the bass separately from the other channels. Music sounds good, better than with the Logitechs, which had a very clear, but sort of distant sound to them in stereo mode. 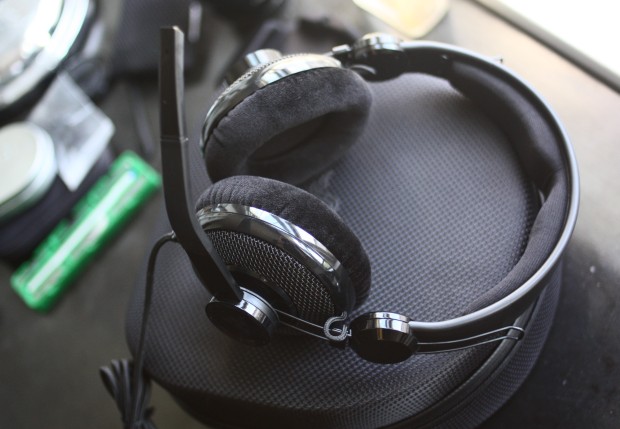 But of course, this is a surround-sound headset and that’s what you want to hear about. The Megalodon’s primary competition is with other virtual-surround headsets, and I think it stands up perfectly well. I recently reviewed the G35, so it’s been my primary comparison. They’re similar in price and in what they promise, after all.

In case you didn’t read the Carcharias review, I should say that both they and the Megalodon use an open headphone design, meaning that they’re lighter and more airy, but also let sound out and in. If you’re in a dorm or something, it’s probably worth considering that if you have these up loud, your roommates will hear everything. Likewise, you’ll hear the music they’re playing, cars in the street and so on. This is neither a good nor a bad thing — it’s just a choice you have to make. The G35s had superb isolation, being closed and well-fitted, but they made my ears sweat. Yeah, gross, I know, but if you have loud roommates as I did in college, it might be worth it to get some closed cans.

On the flip side, the sound doesn’t seem to be affected by their openness. There’s a sort of common wisdom that closed headphones provide better sound, and while they do provide better isolation, the sound can still vary considerably. This headset sounds great; if you have a game or movie that actually supports virtual surround (more on this shortly), you’re golden. I felt that the high end was more balanced on the Megalodon than the G35 — or maybe it was how they handled the surround, but the hissing of dispensers in Team Fortress 2 was nowhere near as harsh. Sound placement was great, and the surround sound functioned just fine in several games.

The main issue I had is this: if you’re listening to something that isn’t surround sound, the Megalodon is pretty awful at faking it. I found that the G35s were passable at taking a stereo signal, or a non-compatible surround sound signal, and making it at least a little bigger. But the Megalodon does something to non-surround inputs that makes them sound like you’re in a can. A small can. Now, this is easily remedied by switching to non-virtualized regular stereo sound — which is fine — but it’s a little disappointing that it can’t fake it as well as the others.

The microphone works with no trouble and sounds just fine; the ability to tweak it in-game is great, since I don’t trust my in-OS or in-game sensitivity to work all the time. You can change the actual sensitivity, mute it, or adjust the feedback (so you don’t yell — seriously, people).

Overall the sound is great. If you can deal with not being able to watch a stereo movie in virtualized surround, there’s not a problem to be found. 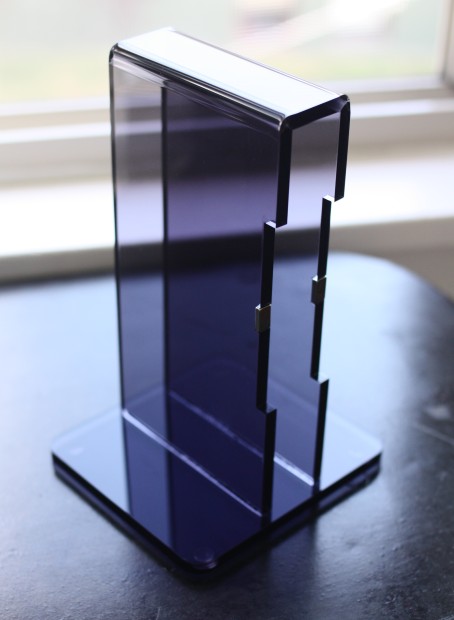 What’s with the stand?

Here’s something I expect to be fixed in the next generation of these things. The Megalodon (and can I just say, referring to it in the singular is extremely difficult for me to do) comes with a stand… and it’s a joke. They need to tie the guy who made this thing to a post and whip him with Cat 5 cables until he admits it’s a piece of garbage. Sorry, but it’s terrible. It’s not tall enough to hold the headphones, really — they slouch and fall off. Where does the cable go? You can roll it up and put it in the hollow center, I guess, and then seal it in with the puck, but man that is difficult and awkward, and then you’ve got this other cord going to the headphones themselves. Seriously, I’d love to put these on a stand — they look great — but this thing is a disaster.

On the plus side, they also come with this genuinely awesome carrying case. You want to look cool at a LAN party? Bust out this professional-looking piece of kit. Everybody will fear you. 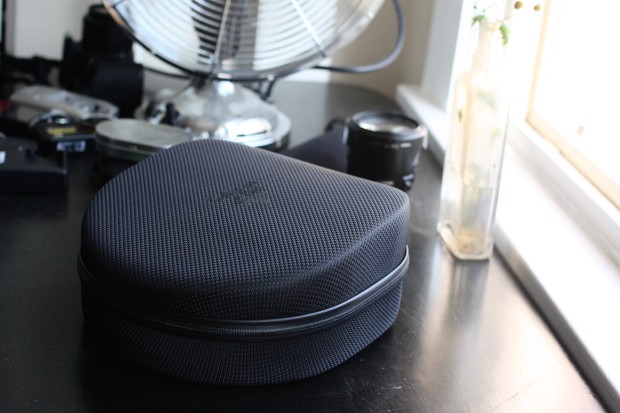 Razer has continually impressed me with their gaming headsets, and the Megalodon is the best yet. It adds functionality to the already-solid Carcharias without compromising in any way, and apart from the metallic effect when you have an incompatible source, the sound is great.

But here’s where we hit a bit of a bump. These bastards cost $150, and I don’t see them around for any less. Even Logitech, famous for expensive gear, has the G35 for considerably less — under $115 at B&H, as I write this. As great as the Megalodon is, I can’t say it’s $40 better than the G35 — or for that matter, $80 better than the Carcharias, with which they have so much in common. I’ve recommended expensive headphones before (the Klipsch X5s at over $200), but that was because they were exceptional. The Megalodon is merely excellent. If you’re on a budget right now, your best bet is to hold off. This is a great headset, but, at $150, a luxury.