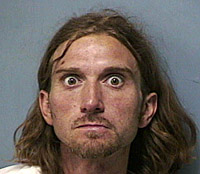 Apparently this man caught fire after being Tased by cops in my hometown of Columbus, Ohio. While it is entirely possible that the Taser burned him it’s also possible that young Daniel Wood here spontaneously combusted.

One day after officers received Tasers this week, two of them were patting out the flames on Daniel Wood, a 31-year-old homeless man who reportedly had been inhaling a chemical from a spray can to get high. Wood was not seriously injured but was taken to a hospital as a precaution, said Lancaster Police Chief David Bailey.

I mean homeboy here was huffing so he was probably covered in toluene, making him unconducive to open flame and heat. It wasn’t big flame, either as they were able to pat him out and then arrest him.

On a related note I think this guy went to my high school.