Meet the Real Live Search, a web app with the tagline, “your browser and Bing’s AJAX APIs make sweet love“. No, this isn’t real-time in the sense that you can search services like Twitter (though Bing has been making headway in that respect). Instead, it’s a seach engine that displays results almost immediately after you type each character in a query. For example, if I was to run a query for “TechCrunch”, it would rapidly display results for “T”, “Te”, “Tec”, and so on as I typed out each letter. It’s flashy, fun, and even useful (sometimes).

The search engine shows results for images, video, and text, as well as related searches. In my testing I found that the app was helpful sometimes, especially for quick image searches, but for the most part this is a fun diversion more than anything — there aren’t too many search queries that yield good results when you’ve only entered half of a word. Update: As comments below note, this actually is quite useful when you’re subtly modifying the same search query to get even more specific.

The app was built by developer Long Zheng of www.istartedsomething.com. In his blog post describing the app, he says that it was built in a few hours and may be prone to bugs (don’t be surprised if increased traffic to the site slows it down for a while).

Inspired by the realtime-ness of Google Wave, I wanted to build a prototype search engine that did away with a search button and page loads. Instead, search queries are sent character-by-character to the lightning fast Bing AJAX APIs which returned JSON results easily processed and formatted by Javascript on the page. The UI experience is driven solely by the browser.

If nothing else, it’s a reminder that Bing has a solid set of APIs available, though there hasn’t been much attention paid to them recently. Bing is notable for having a less restrictive API than Google — Bing lets you reorder results from the web, while Google does not (Yahoo’s BOSS also gives developers quite a bit of freedom). 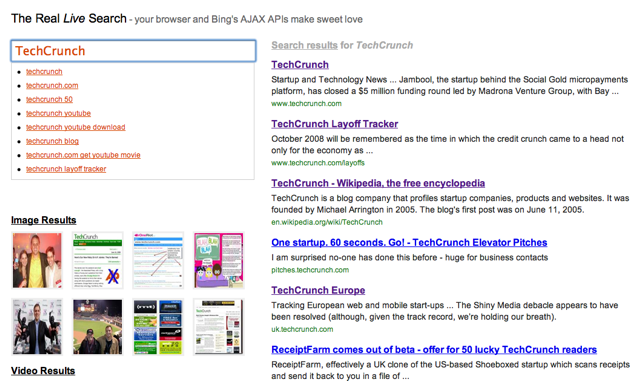