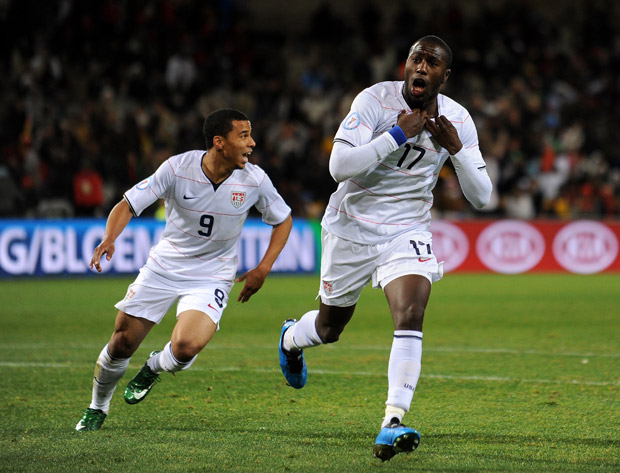 Can EA help make the next Jerzy Altidore? Its worth a shot.

You would think that with a population of 300 million the U.S. would be a little better at soccer than it currently is. Not that the US Mens National Team is terrible—its victory against Spain in the Confederations Cup in June was all kinds of great—but we’re (yup, Royal We time) not exactly known as a “world power,” mentioned in the same breath with Italy, Germany, Spain, Brazil, and Argentina. In steps… EA? Yup, we just got word that EA Sports, makers of FIFA 10, has teamed up with US Soccer to develop and promote a series of training videos that young players can use to improve their game. Is is enough to to give some future USMT the World Cup one day? US Soccer certainly has high hopes.

The premise is pretty simple, actually. American kids spend an awful amount of time playing video games, so why not get these kids, kids who have already expressed an interest in the sport, to improve their game a little bit? EA set up a new Web site, Interactive Training, that has a series of tutorial videos that explain the basics of the game to youngsters. (The program is aimed at 8-12 year olds.) So you’re playing a round of FIFA against your son/daughter or younger brother/sister, and you say, “Wow you’re good at headers in the game. Let’s go to this Web site where they’ll teach you how to actually head the ball.”

That’s just what US Soccer would like to see, at least. I talked to John Hackworth, who’s the U.S. Soccer Development Academy Technical Director (a fancy title that means, essentially, he’s in charge of youth development), and he said that, yeah, U.S. Soccer should try to leverage, if that’s the right word, kids’ proclivity to sit down and play FIFA all day long. Why not tell these kids, “Look, you’re pretty good at this game, why not try it out for real?” That way you’ve exposed the sport to a large number of kids who might turn out to be halfway decent one day.

Again, no one expects overnight success here, especially if it’s targeting young kids. But there’s nothing wrong with steps in the right direction.