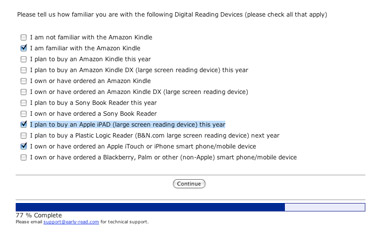 Good afternoon and welcome to Chez Apple Rumors. Your first lunch course will be an iPod Touch with a camera followed by the accidental insertion of something called the IPAD into a survey for Borders Books. Can I get anyone anything to drink?

So we begin this Eng video of the iPod Touch with camera that we talked about this week. It’s apparently a prototype model that was ground to bits by Apple’s stress testers and then recycled. As you see from the video after the jump, the old fellow has a camera.


Then, as you see from the above screenshot, we learn that Borders is talking up something called the iPad, a noble and befitting name for a device that is a Pad and is made by Apple. I did a trademark search and came up with bupkus, but that doesn’t mean they won’t assign it by January.

The Borders survey asks if you’re planning to buy an Apple IPAD (Large Screen Reading Device),” which either suggests someone at Borders is taking the piss or they have horrible web designers who never talk to legal.

This is all well and good but of what are we certain? We know that upcoming iPods will have cameras come September 8 or so and that the iPad or whatever it will be called will drop in 2010. All the rest of these rumors and videos are just icing on the already delicious Apple future device cake.