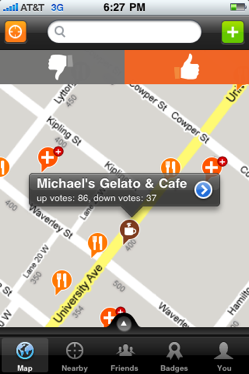 One of the big problems with starting a new service that relies on user submitted data is getting people to actually use it — nobody is going to routinely boot up your app if they don’t have an incentive to do so. One way to tackle this problem is by working the service into a game, which is a technique that seems to be working quite well for Foursquare, a service that makes it easy to find your friends. GraffitiGeo is a new Y Combinator funded startup launching tonight that’s looking to combine similar gameplay elements to take on a different space: restaurant reviews.

At its core GraffitiGeo allows users to leave brief reviews of restaurants, or for those too lazy to do that, to simply leave a ‘thumbs up’ or ‘thumbs down’ — it’s like a highly condensed version of Yelp, or a “Digg for the world”. These reviews and votes can be cast from the site’s iPhone app or from the service’s homepage. The homepage also features a stream of the latest comments to come in from other users, as well as a profile for each restaurant in the system that includes all of its votes and comments. There’s also a nifty feature that lets you view a heatmap of your current region, so you can quickly figure out the hot spots in town.

The gameplay in GraffitiGeo is a bit more complex than that found in Foursquare, which gives you points for checking in but doesn’t really let you do anything with them. With GraffitiGeo, you earn points for every action you take, be it voting on a restaurant or leaving a brief comment. Once you’ve reached a certain point threshold, you can use those points to start a ‘mob’, which you can invite your friends to join. Mobs allow friends to pool their points, which can then be used to acquire territory, which corresponds to actual city blocks. Whenever someone votes on one of the restaurants on the block, the mob gets some street cred too. It’s definitely going to be confusing at first, but it also brings a team element to gameplay — something that Foursquare lacks. You can read more about the mob game here.

GraffitiGeo is also working on a second related iPhone app that combines the site’s data with augmented reality — in effect, it turns your iPhone into a viewfinder for looking up restarurant info (see the video below for a demo). Just hold the iPhone as you would a camera and point it in the direction of the restaurant in question, and an overlay featuring GraffitiGeo comments will hover over it. It’s very cool (we’ve seen a number of other AR apps that are on the way), though we’ll have to wait a while longer to try it out.

GraffitiGeo has some good ideas (especially with the AR app), but it still has its work cut out for it. For one, Yelp is going to prove a very tough competitor — it already has a vast amount of data, and while it may be annoying having to sift through long reviews at times, I don’t think people find it annoying enough to stop using that site. The startup also has some work to do on the iPhone app and the service’s homepage, both of which are functional but could still use some polish. 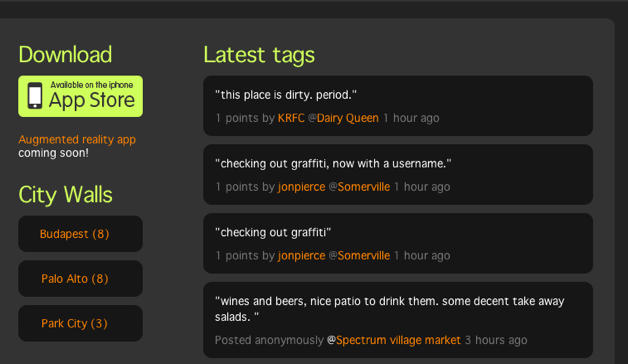