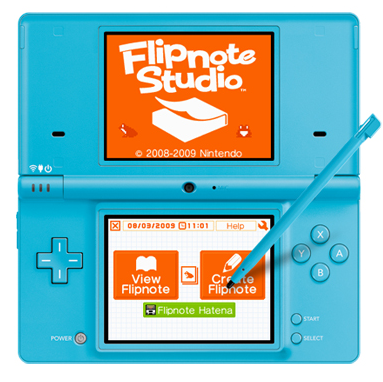 There are seven million Nintendo DSi in the world now, and the system is the first in the DS series (total sales: 102 million) boasting Internet connectivity. And Nintendo just stepped up efforts to tap the handheld’s network effect by releasing Flipnote Studio, a social drawing app that’s available for free in the DSiWare store. It’s the first user-generated web service for the DSi.

Users can draw pictures (or use photographs), add sounds to them and remix their works in the form of simple animations reminiscent of flipping through a notepad. The so-called Flipnotes can be saved on the device and then uploaded to the web where they can be shareed with other DSi users. People can then view the animations, rate or leave a comment on them.

This is possible on Flipnote Hatena (Hatena is a web company Nintendo teamed up with to create Flipnote Studio), but DSi users can also send Flipnotes to a friend’s device, too.

The service debuted yesterday in North America and will be released in Europe tomorrow. Flipnote Studio will then be available in English, German, Spanish, Italian and French. The Japanese version was released in December last year and has seen more than 1 million uploads by users since.

Here is a pretty cool Flipnote video made by a Japanese user:
http://blip.tv/play/grExgZiEVgI