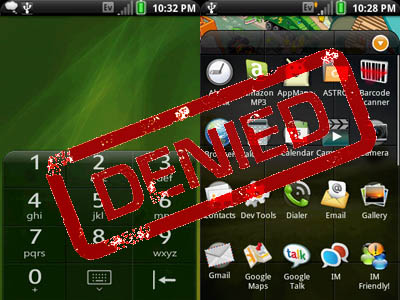 Lets say you just finished hacking and cracking your myTouch 3G through the just unveiled rooting process. With the myTouch lagging behind some other in the looks department, your first quest is to retheme it. You’d heard about a Palm Pre skin, which decks Android out with Pre-esque visuals from top to bottom. Partly out of spite and partly out of genuine curiosity, you set out to find it.

Earlier this week, the developer of the Palm Pre skin, L3wish, received a letter from the Sunnyvale mothership. “You should probably take this stuff down, or we’ll stop pretending you’re not infringing all sorts of copyrights,” it read – except spread out across 714 words.

Citing the potential for “widespread consumer confusion” and the usage of Palm’s trademarks (the skin was outright called “Palm Pre theme”), Palm demanded that all materials be taken down. The developer has since pulled the download, and any instances of it we knew of have disappeared. You can probably find them in a few minutes with Google – but then again, so can Palm’s lawyers.