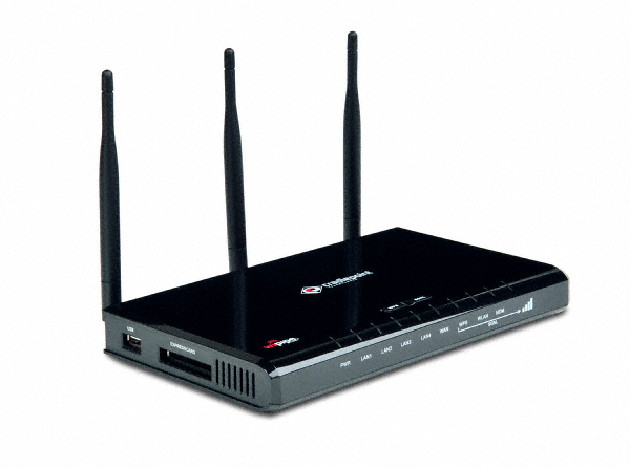 Sprint currently only offers its 4G services in Baltimore, but that’s going to change this month when it rolls out the wicked fast service in Portland, Atlanta and Las Vegas. To harness the power of the new network, Sprint announced two new 4G routers today, the Sprint Personal Hotspot PHS300S and Cradlepoint MBR-1000. (There’s also the 3G/4G USB Modem U300.)

The former will support up to four simultaneous connections while the Cradelpoint can handle up to 32 users at once and both will support all of Sprint’s 3G and 4G USB dongles. Service plans range from $40 to $80 per month. The Sprint Personal Hotspot is priced at $160. The Cradlepoint is available through business sales for $250.

Sprint will expand its 4G network this year to the following cities: Charlotte, Chicago, Dallas/Ft. Worth, Honolulu, Philadelphia and Seattle.

Overland Park, Kan. – August 5, 2009 –The search for the elusive Wi-Fi hotspot is a thing of the past for Sprint mobile broadband customers. Instead of hunting for a coffee shop or other fixed hotspot, Sprint’s new Mobile Broadband Router products connect multiple Wi-Fi-enabled devices at 3G or 4G mobile broadband speeds where Sprint 3G and 4G networks are available.

On the heels of launching the Novatel Wireless MiFi 2200 intelligent mobile hotspot – which allows customers to simultaneously bridge several Wi-Fi devices to America’s most dependable 3G network1 – Sprint now adds two 3G/4G Mobile Broadband Routers to its mobile broadband arsenal: Sprint Personal Hotspot PHS300S and Cradlepoint MBR-1000 Broadband Router for business, each featuring both 3G and 4G connectivity. These devices are available for use with any Sprint 3G or 4G data plan ranging from $39.99 to $79.99 per month (excluding taxes and surcharges).

Used in combination with Sprint mobile broadband devices, like the 3G/4G USB Modem U300, these Mobile Broadband Routers can simultaneously connect Wi-Fi-enabled smartphones, laptops, MP3 players, cameras, gaming devices and other Wi-Fi-enabled devices to the Sprint 3G and 4G networks. Used with a broadband device, The routers provide access to the turbo-charged Sprint 4G network as it continues to roll out and access to America’s most dependable 3G network virtually everywhere else. Users can enjoy secure, high-speed connections from virtually any location, whether on a family outing at the beach or doing business at a remote job site.

Sprint Personal Hotspot PHS300S supports up to four simultaneous Wi-Fi connections and Cradlepoint MBR-1000 Broadband Router for business supports up to 32 simultaneous Wi-Fi connections. Both routers will support all of Sprint 3G and Sprint 4G mobile broadband USB devices.
“These mobile broadband routers provide an unprecedented bridge to high-speed network performance for multiple Wi-Fi devices or multiple users,” said Todd Rowley, vice president, Sprint 4G. “The addition of these mobile hotspot products offers even faster connectivity speeds to Wi-Fi users without the need to find a Wi-Fi hotspot. These two new products can potentially connect the Sprint 3G and 4G networks to the hundreds of millions of Wi-Fi-enabled devices in the U.S. today.”

The ability of these Mobile Broadband Routers to be used with both 3G and 4G networks will offer added advantages for a growing number of Wi-Fi users across the country. The Sprint Now Network already features 3G speeds that are faster in more places than the AT&T network.2 As the turbo-charged Sprint 4G network continues to roll out in markets across the country, customers will be able to further optimize the performance of their Wi-Fi devices, using them to connect them with the industry’s fastest available network speeds.

Sprint Personal Hot Spot PHS300S is priced at $159.99 and available in select Sprint retail stores within Sprint 4G markets, telesales, business sales and at www.sprint.com. Cradlepoint MBR1000 broadband router is priced at $249.99 and is available via business sales, telesales and online at www.sprint.com (all prices exclude taxes).
The first and only national carrier to offer 4G wireless services, Sprint currently offers 4G in Baltimore and will launch 4G in Portland, Atlanta and Las Vegas in August. Sprint 4G provides average downlink speeds of 3-6 Mbps and peak downlink speeds of over 10 Mbps, three to five times faster than today’s 3G service from any carrier (based on average download speeds).
The following markets are included on the list to experience Sprint 4G in 2009: Atlanta, Charlotte, Chicago, Dallas/Ft. Worth, Honolulu, Las Vegas, Philadelphia, Portland and Seattle. Also available for customers nationwide is the Sprint 3G/4G USB Modem U300, which provides the best of both worlds – the fast 3G speeds and lightning-fast 4G speeds wherever 4G is available.
For additional information on Sprint 4G mobile broadband products and plans, visit www.sprint.com/4G.