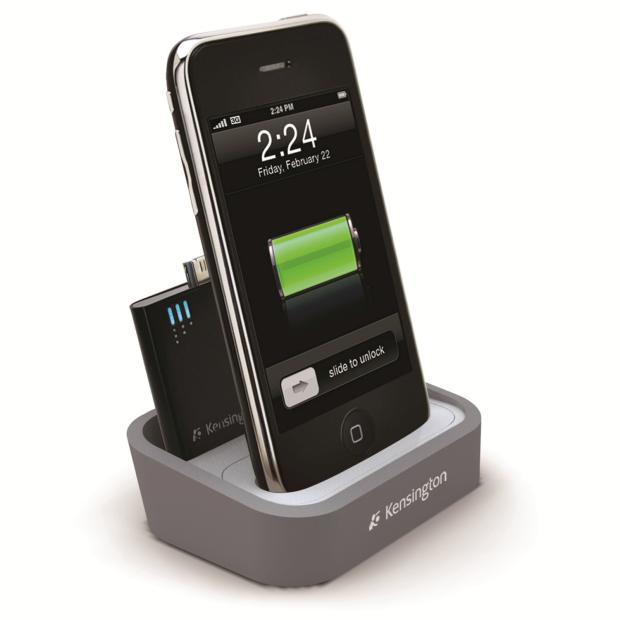 Kensington’s rolling out some new accessories today, a couple for the iPhone/iPod and a couple laptop stands. The two iPod devices are pretty interesting. First, the “Charging Dock with Mini Battery Pack for iPhone and iPod” that Peter posted yesterday is pretty much exactly like it sounds. But there’s more!

To recap, the dock is a charging USB system (shown above) with an included on-the-go emergency battery that charges in tandem with your Apple device. The battery pack is apparently good for up to 30 hours of music playback, 6 hours of video, or 3 hours of talk time. It’s available for pre-order with a suggested retail price of $70, which seems a tad on the expensive side. Retailers may sell it for cheaper, though.

Charging Dock with Mini Battery Pack for iPhone and iPod

Next, this “Nightstand Charging Dock for iPhone” is a pretty simple idea that turns your iPhone or iPod touch into an alarm clock with weather info. The charging apparatus holds your device in place horizontally and features big clock numbers along with weather info in the lower left corner. Click the weather icon and you’ll get a full five-day forecast. The app itself, called Kensington Rise&Shine is available for free from the App Store, while the charging dock is available for pre-order with a suggested price of $40.

Finally, we’ve got a couple laptop docks. First, the “TwoFold Notebook Stand” is a flat-folding notebook stand. “Stores flat, then sets up in a snap,” says Kensington. It’ll cost around $20 — available for preorder.

Then, take the same stand and build a protective notebook sleeve around it and you’ve got the “TwoFold Notebook Stand and Sleeve” for $40. It’s a transforming, flat-folding notebook stand that doubles as a protective sleeve for your laptop. That’s actually not a bad idea at all.