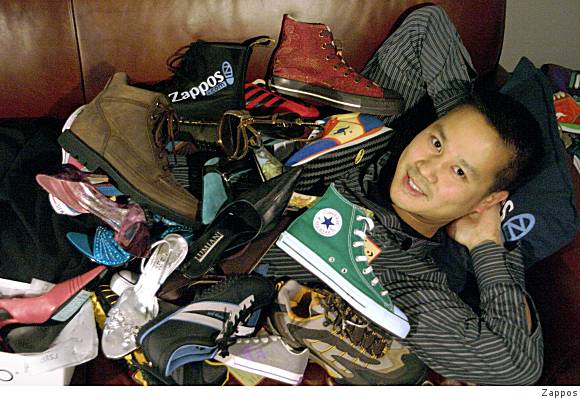 If Zappos was a forced sale, would someone please come force me a raise?

Zappos just  filed its S4 with the Securities & Exchange Commission, which details the history of the merger talks with Amazon. There’s a lot of boring boilerplate here, but one of the more interesting bits is on page 68, where there’s a confusing breakdown of Zappos’ ownership.

The percentages appear to add up to way over 100% because the shares of Venture Frogs are essentially counted three times. Venture Frogs was the firm Zappos CEO and CFO Tony Hsieh and Alfred Lin used to own that first invested in Zappos back in 1999. Because either of them “could” contol the voting shares, the SEC counts each of the shares under their names, as well as under the Venture Frogs name.

But once you back that out, one thing is clear: No one could sell the company without the blessing of Hsieh and Lin. CEO Hsieh owns 29.4% of the common shares, CFO Lin owns another 2.7% and Venture Frogs– the firm they started and jointly manage– owns another 39.9% of the shares.

Sequoia owned 22% of the company, but made different returns depending on the liquidation preferences in each term sheet. In all, the firm is poised to make a return of roughly $160 million, based on Amazon’s closing price today. Sequoia invested $35 million over the companies E and F rounds. Not bad.

It’s much harder to see how much Hsieh and Lin are making, because no one knows how much of the proceeds of the Venture Frogs shares goes to their pockets or to their LPs. But they clearly did well. Hsieh made at least $214 million; Lin made at least $18 million, with the Venture Frogs shares netting an additional $163 million. If that’s a forced sale, the two are crying all the way to the bank.

Another shocker from the S4: Zappos’ revenues. We’re so used to that $1 billion-in-gross-merchandise-sales figure being bandied about that people tend to confuse that with Zappos’ actual sales. But that number doesn’t count returns, which can be as high as 40% according to people close to the company. The real sales from 2008 were $635 million, up from $527 million in 2007. In the first quarter of 2009, Zappos grew revenues at a clip of 8%.

So while you can argue Amazon still got a great deal; Hsieh and Lin did pretty well too. That makes it all the more impressive that they’re sticking around to keep growing the company rather than heading to a remote beach.