News aggregator site and Digg -competitor Mixx had a rough June. Traffic to the site took a 68 percent nosedive in the U.S. from May to June, according to comScore (see chart). Compete shows a similar trend.

Wondering if Mixx had maybe been paying for traffic and had now stopped, I asked CEO Chris McGill if this was the case. Absolutely not. He replied: “We have never paid for traffic… Not once. How could we? … We have operated for two years on almost no money.” Hard to argue with that. Mixx has only raised $3.5 million to Digg’s $40 million, and is “nine guys sitting in a boiler room.”

So what happened? McGill admits, “We had some performance problems in the month of June.” A database problem and a DNS change ended up temporarily blocking Google. Traffic was only down 30 percent, says McGill, and has almost fully recovered in June. He sent me a screen grab from Google Analytics (below) showing that in the first half of July, unique visitors tripled to 1.5 million compared to the first half of June. For the full month of June, he sent me a Google Analytics page showing 1.8 million total visitors. (comScore’s estimate for U.S.-only unique visitors in June was 337,000, but it typically under-reports traffic for small sites).

If Mixx’s drop was just a technical issue (and I have no reason to doubt McGill’s explanation, he was very upfront with me), then comScore and Compete should pick up the site’s rebound in their July numbers. I hope that’s the case because Digg needs competition. For instance, in April, Mixx started experimenting with showing ads based on user voting, a great idea which Digg then started taking seriously in June. And just yesterday, it launched TweetMixx to tap into hot links appearing on Twitter. 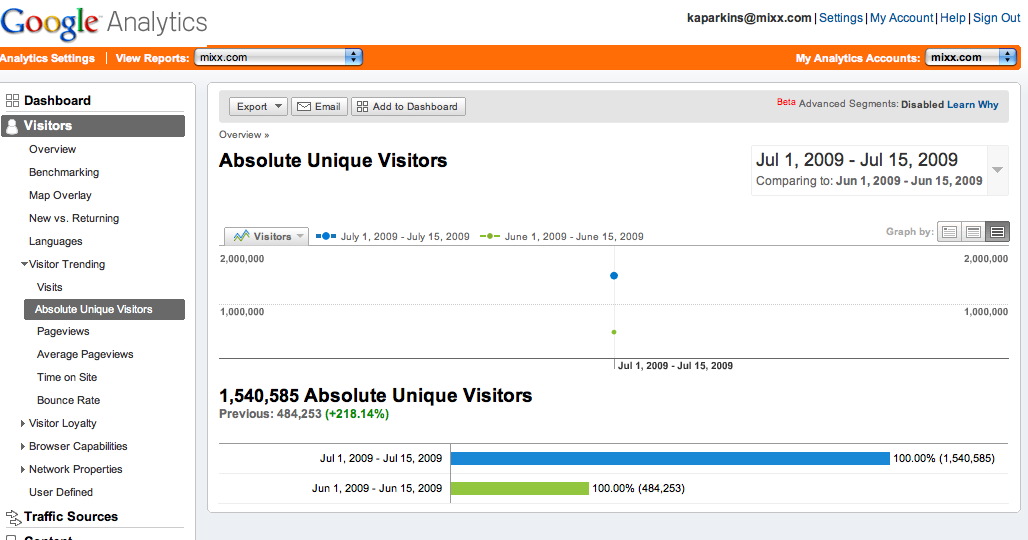