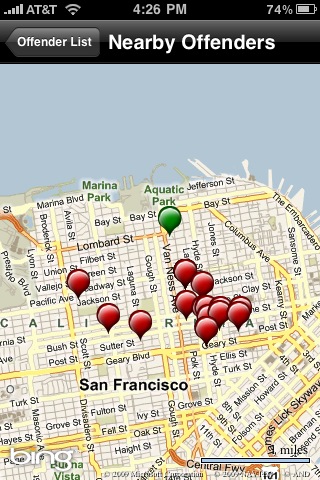 Looking over the top 10 paid iPhone apps list today, the list appeared pretty typical: A bunch of games, a camera app, etc. Then I noticed one called Offender Locator [iTunes link], mostly because it has a creepy icon. I figured it was a game — it’s anything but. It’s an app to show you registered sex offenders living around you.

While all 50 states require that sexual offenders register themselves, and allow anyone to access the information online, most people never look at it. That’s why it’s surprising that this app is a top seller — especially considering that it’s not free (it’s $0.99). Certainly, it’s good to be aware of these people living around you — especially if they have committed acts against children, and you have children — but it’s interesting that it’s the iPhone that is making such information “popular.”

The app allows you to see a list of offenders based on your current location (using the iPhone’s location services), any contact’s address, or it allows you to manually enter an address. The app then scours the database and lists the sexual offenders based on their proximity to the location you gave. You can click on any of these names to get a picture of the person, their information like date of birth, height, weight, and a picture. And you can also see the specific sexual crime they were charged with.

But, as you might imagine, such an app is not without controversy. First of all, there’s a disclaimer when you first load it up warning that all of the information may not be accurate. The reason it gives are that the sexual offender lists are continuously updating, so some parts may be out of date or incomplete.

An even bigger problem is that the app may not be legal in all states. As someone who reviewed the app notes, “This app is not legal, at least under CA law. Selling the personal information of people (even ex-criminals) for profit is forbidden.” It is rather odd that this app costs money when the information is available freely on the web. As a top 10 app, the developer is likely making thousands of dollars a day off of this app.