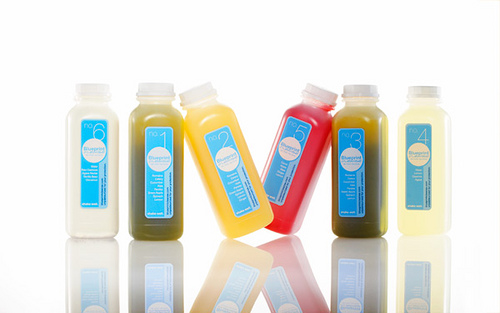 Things have changed a bit.  Today, the hair is purposely disheveled and coders not only get out in the fresh air– they go climbing. Some even drink green tea instead of coffee. (Cough, cough, Kevin Rose.) And, increasingly, I’m seeing start-up kitchens with — gasp– no junk food. Some have even called full-on bans against soda and Red Bull. In short, we’ve gone all California on ourselves.

It’s not nearly as macho as coding all night on jerky and Jolt, but clearly in an employer’s best interest to swap out carb-crashing junk food for more sustainable fare. Enter Blueprint Cleanse— a company that’s opening San Francisco operations in the next few months and, IMHO, is going to absolutely clean up, literally and figuratively. And in August, California residents can try it for $20 cheaper per day.

We’re already huge fans at TechCrunch: I’ve done it, Leena has done it, Heather is doing it next week and even Arrington has put down his Chipotle burrito for a few days to cleanse. Yes, the same Michael Arrington.

Blueprint is a great example of the Web’s ability to radically transform a weirdo hobby into a growth market. It’s basically an ecommerce company for juice cleansing, making the off-putting, hippie trend seem accessible and, well, normal. The Web site walks you through which plan to pick and all the normal questions like “So I really don’t eat for three days?” (Answer: Yes.) You order, and FedEx delivers you six bottles of freshly pressed juice for every day you’re cleansing. They’re labeled, the packaging is nice, and they even send little coolers so you can take them around with you. The founders, Erica Huss and Zoe Sakoutis have obsessed about every detail of the experience, starting with the most important thing, the juice itself.

In New York, it’s even become the juice cleanse for foodies, being written up in Food & Wine and guzzled by the likes of Mario Batali. Yep, the juices are that good. And from what I hear, Huss and Sakoutis are turning down would-be investors left and right.

The problem? It’s horribly expensive. $85 per day if you’re outside New York, thanks to shipping costs. That’s more than $10 per bottle and way too steep for most of us. For New York residents, it’s $65 a day– still pricey, but somehow that $20 difference makes it a lot more accessible. Huss and Sakoutis get that, which is why they’ve decided to prime the California market with the August shipping discount. (When they actually open in SF, we’ll celebrate by forcing them to give TechCrunch readers a special discount.)

I know what you’re thinking, because I used to think the same thing. I am a meat-loving Southern girl. Add in being a writer, and that means I drink more than I should too. I am the last person who ever thought she’d be doing a juice cleanse. I tried Blueprint out of pure desperation. A bout with pneumonia last year meant anytime I traveled or pulled an all-nighter I got sick. That’s obviously untenable given I’m writing a book about emerging markets and on a 10-plus hour flight every month. After just one three-day cleanse I felt healthier than I had in two years.  Four months later, I haven’t so much as had the sniffles.

But here’s the real test: I’ve convinced our newest irascible columnist Paul Carr to try it next week. Yes, Mr. hookers-on-one-arm, bottle-of-rum-in-the-other will be waking up Friday morning and starting his day with this: 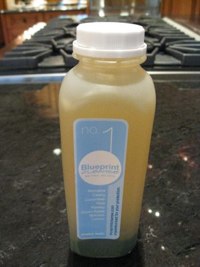 I’m betting if you cut Paul’s arm, a mix of nitrates and rum would come pouring out. If he can handle it, I think even those old school Fry’s electronics geeks can too. If nothing else, it should make for an entertaining week two of his Saturday column.

Disclosure: The company is sending out free samples of the product to press in California, including us, this week. I and others at TechCrunch have paid full price for this product in the past.